Offshore Wind, The Green Energy Scam for All Time

Can anti-fossil fuel policies based on climate crisis alarmism possibly get any more insane than this?

In what might be described as a pre-Halloween trick of ginormous proportions,   he assures us. That’s well above the current global demand of 23,000 terawatt hours, Birol and a new IEA report say.

In fact, the potential for offshore wind energy is so great, the IEA asserts, that 20 years from now the industry will be 15 times bigger than in 2019 – and will attract $1 trillion a year in investments (riding the coat tails of government mandates and subsidies). The boom will result from lower costs per megawatt, larger turbines, and technological developments like floating platforms for turbines, says the IEA.

Wind “farms”? Like some cute, rustic Old McDonald family farm? Are you kidding me? These would be massive offshore electricity factories, with thousands, even millions, of turbines and blades towering 500-700 feet above the waves. Only a certifiable lunatic, congenital liar, complete true believer, would-be global overseer or campaign-cash-hungry politician could possibly repeat this IEA hype – or call these wind energy factories renewable, sustainable or eco-friendly. 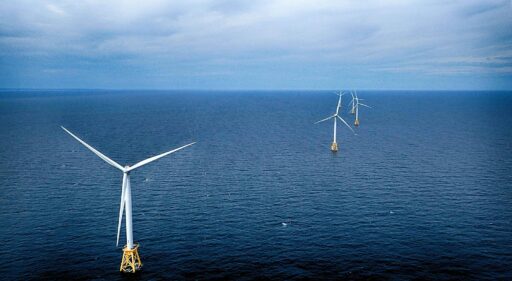 They all clearly need yet another bucket of icy cold energy reality dumped over their heads – in addition to this one, this one and this one. If the world buys into this crazy scheme, we all belong in straitjackets.

As I have said many times, wind and sunshine may be free, renewable, sustainable and eco-friendly. But the turbines, solar panels, transmission lines, lands, raw materials and dead birds required to harness this widely dispersed, intermittent, weather-dependent energy to benefit humanity absolutely are not.

By my rough calculations (here and here), replacing just the USA’s current electricity generation, backup coal and natural gas power plants, gasoline-powered vehicles, factory furnaces, and other fossil fuel uses with wind turbines and backup batteries would require: some 14 million 1.8-MW onshore turbines, sprawling across some 1.8 billion acres, some 15 billion tons of raw materials, thousands of new or expanded mines worldwide, and thousands of mostly fossil fuel-powered factories working 24/7/365 in various foreign countries (since we won’t allow them in the USA) to manufacture all this equipment.

Those overseas mines now “employ” tens of thousands of fathers, mothers and children – at slave wages.

Can you imagine what it would take to build, install and maintain 36 billion megawatt-hours of offshore wind turbines … in 20 to 200 feet of water … many on floating platforms big and strong enough to support monstrous 600-foot-tall turbines … in the face of winds, waves, salt spray, storms and hurricanes?

The impacts on terra firma … and terra aqua … would be monumental, intolerable and unsustainable.

Moreover, a new study – by the company that has built more offshore industrial wind facilities than any other on Earth – has found that offshore turbines and facilities actually generate much less electricity than previously calculated, expected or claimed! That’s because every turbine slows wind speeds for every other turbine. Of course, that means even more turbines, floating platforms and raw materials. Using 3, 9 or 10-MW turbines would mean fewer of the beasts, of course, but larger towers, bases and platforms.

More turbines will mean countless seagoing birds will get slaughtered and left to sink uncounted and unaccountable beneath the waves. The growing jungle of fixed and floating turbines will severely interfere with surface and submarine ship traffic, while constant vibration noises from the towers will impair whale and other marine mammals’ sonar navigation systems. Visual pollution will be significant. And there’d be thousands of miles of submarine cables bringing electricity to onshore transmission lines.

Maps depicting the USA’s best wind resource areas show that they are concentrated down the middle of the continent – right along migratory flyways for monarch butterflies, geese, endangered whooping cranes and other airborne species; along the Pacific Coast; and along the Atlantic Seaboard.

Coastal states, especially their big urban areas, tend to be hotbeds of climate anxiety and wind-solar activism. Indeed, many Democrat Green New Deal governors and legislators have mandated 80-100% “clean, renewable, sustainable, eco-friendly” energy by 2040 or 2050. California, Oregon and Washington in the West … and Maine, New York, New Jersey, Connecticut and Virginia in the East … are notable examples. So the IEA’s love affair with offshore wind energy is certainly understandable. Of course, Blue State Great Lakes would also be excellent candidates for fixed and floating turbines.

Pacific Ocean waters typically get deep very quickly. So thousands of huge floating platforms would be needed there, although Puget Sound is also windy and could be partially denuded for turbines, as they’ve done in West Virginia’s mountains. California prefers to import its electricity from neighboring states, rather than generating its own power. However, as Margaret Thatcher might say, pretty soon you run out of other people’s energy. So homegrown wind energy will soon be essential – and inland Golden State and Middle America voters would almost certainly support putting turbines straight offshore from Al Gore’s $9-million mansion in Montecito and the Obamas’ $15-million cottage in Rancho Mirage.

When it comes to actually implementing these ambitious “renewable energy goals,” resistance and delays grow exponentially. A Massachusetts wind project for 170 offshore wind turbines was originally proposed around 2001. It’s now down to 130 3.6-MW behemoth turbines, with the US Interior Department delaying permits yet again, pending “further study.” The reaction of coastal residents to the reality of endless thousands of turbines could well turn into Fossil Fuels and Nuclear Forever.

Actual electricity output is rarely as advertised. It often hits 20% or lower, depending on locations – and fails completely on the hottest and coldest days, when electricity is most urgently needed. During the July 2006 California heat wave, turbines generated only 5% of nameplate capacity. In Texas, wind capacity factors are generally 9% to 12% (or even down to 4% or zero) during torrid summer months. Offshore, echoing Samuel Taylor Coleridge, they’d be as idle as a fleet of painted turbines upon a painted ocean.

Actual wind turbine electricity output declines by 16% per decade of operation – and worse than that offshore, because of storms and salt spray. Removing obsolete offshore turbines requires huge derrick barges and near-perfect weather. Costs and difficulties multiply with turbine size, increasing distance from shore, and whether concrete bases and electrical cables must be removed and seabeds returned to their original condition, as is required today for offshore oil and gas operations.

Cutting up 300-foot (or taller) towers and 200-foot (or longer) blades from offshore turbines, and hauling the sections to onshore landfills and scrap yards, is no piece of cake. Recycling blades is also difficult, because they are made from fiberglass, carbon fibers and petroleum resins; burning blades releases hazardous dust and toxic gases, and so is (or should be) prohibited.

Dismantling and disposal costs could easily reach millions of dollars per offshore turbine, and many billions for every industrial-scale wind “farm.” But wind energy operators should not be allowed to simply leave their derelicts behind, as they have done with smaller turbines in Hawaii and California.