Ohio Air Being Cleaned by Fracking: The Fruit of the Shale Revolution

Ohio air is getting cleaner by the day thanks to the shale revolution; that is to say fracking. The Consumer Energy Alliance spells it all out for everyone.

The Consumer Energy Alliance (CEA) is calling attention to the “great untold story” in Ohio and across the nation, a story intentionally ignored over the past week of faux climate change protests by kids playing hooky from school. What is the untold story? That the United States in general, and Ohio in particular, is “leading the world in environmental stewardship and emission reduction.” How? Because of shale energy–specifically because of shale gas. Yes, Ohio air is cleaner due to fracking. 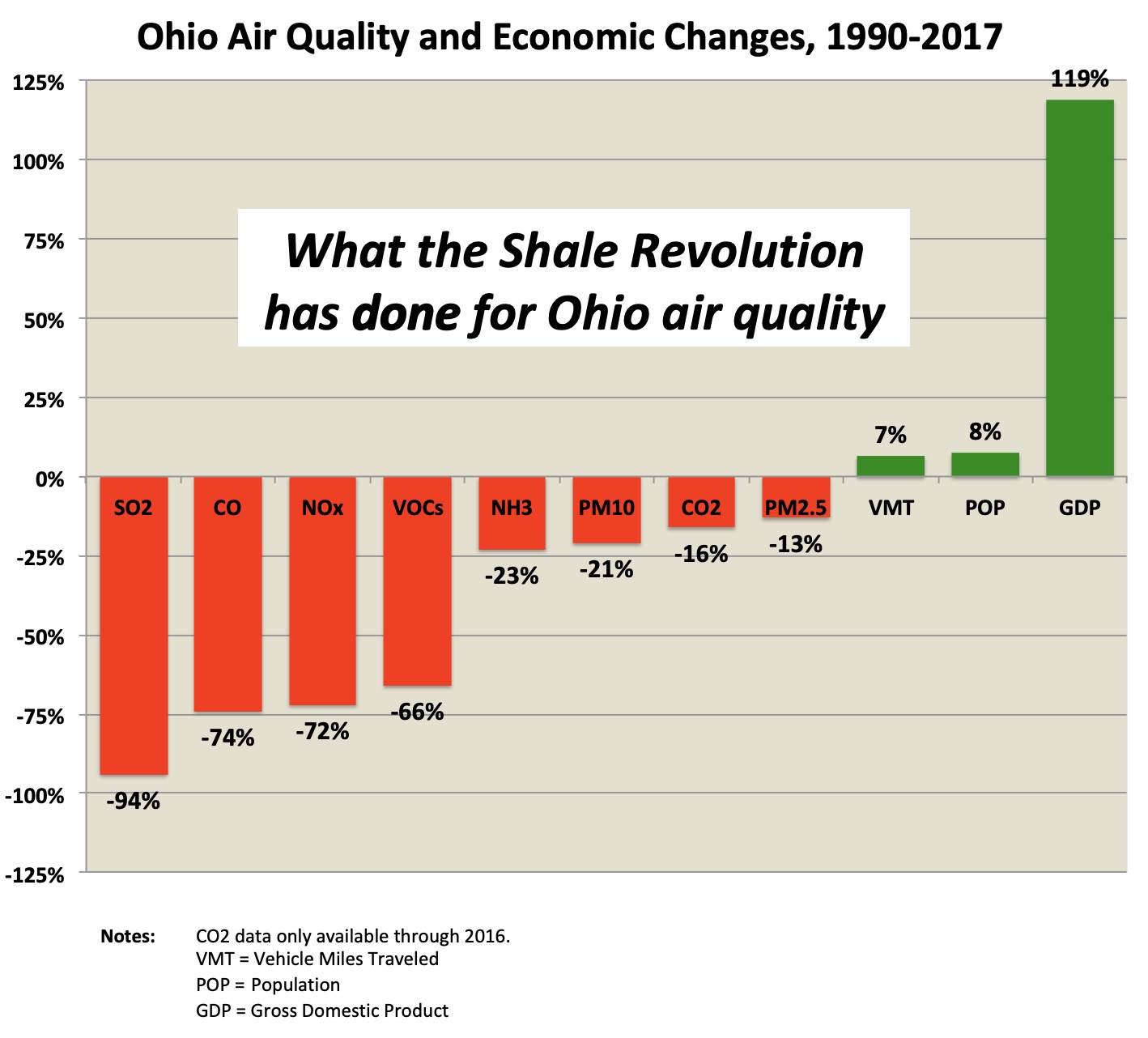 While the rest of the world rants and raves and pretends to be doing something about global warming (yet doing NOTHING), the U.S. is actually doing something. In Ohio, carbon dioxide (CO2) emissions from 1990 to 2016 went DOWN 16%–even though the amount of energy produced and used went up. Nitrogen oxide (NOx) emissions in Ohio went DOWN 72% over the same period. Volatile organic compounds (VOCs) went DOWN 66%. And sulfur dioxide (SO2) went DOWN an amazing 92%.

And yet, mainstream news refuses to discuss this information or share it with the general public–proving yet again why mainstream news is now nothing more than propaganda.

Sadly, it’s left to groups like the CEA to get the word out to the public:

Consumer Energy Alliance (CEA) today released an Ohio emissions brief that looks at key pollutants and the overall environmental improvements seen across the state. The brief offers further support for one of the great untold stories in Ohio and across the country, the United States is leading the world in environmental stewardship and emission reduction.

The brief comes as youth across the country marched in support of a healthier environment, and to seek answers from community leaders, policymakers and adults about what is being done to improve our environment while also meeting today’s growing demand for energy. This brief shows everyone that many of their questions have already been answered by ongoing innovation and technology in the U.S.

CEA’s brief found that even as Ohio increases its energy production and remains one of the nation’s largest energy consumers, emissions of key air pollutants and greenhouse gases have declined significantly across the state.

From 1990 to 2017, Ohio’s emissions of key pollutants have decreased across the board, with:

Moreover, while Ohio’s emissions of key pollutants and carbon dioxide were decreasing, the state saw a marked increase in energy production, boosting job creation and economic growth. Ohio production of natural gas increased more than 1,900 percent over the past decade.

“As Ohioans continue to voice their support for creating a healthier environment, and ensuring access to affordable and reliable energy, we are happy that data from the EPA and the WHO demonstrates that Ohioans can simultaneously have a cleaner environment and energy production,” said Chris Ventura, CEA’s Executive Director in Ohio. “This is due in part to the commonsense regulatory policies enacted by our elected officials and the voluntary actions that have been taken by companies across Ohio to the benefit of our communities. We should all be proud that Ohio is one of the leading states in the nation in realizing greater emissions reductions. Now, let’s keep this amazing progress going!”

This brief follows CEA’s Energy Savings Report for Ohio consumers, which found that families, small business and manufacturers across the state saved over $40 billion on their natural gas utility bills over the past decade. This is due to the prolific American Energy Revolution occurring in Southeast Ohio, and similar states across the country.

Consumer Energy Alliance (CEA) is the leading consumer advocate for energy, bringing together families, farmers, small businesses, distributors, producers, and manufacturers to support America’s environmentally sustainable energy future. With more than 550,000 members nationwide, our mission is to help ensure stable prices and energy security for households and businesses across the country. CEA works daily to encourage people across the nation to seek sensible, realistic, and environmentally responsible solutions to meet our energy needs. Learn more at ConsumerEnergyAlliance.org.