Oil and Gas Music from the Heartland of America and Business

Oil and gas music is a thing, believe it or not, and it captures the very real practical culture of the oil and gas industry, which is thoroughly American.

I’m convinced one of the reasons the gentry class hates oil and gas, in addition to their own special interests, is that it is a bourgeois industry, run, from top to bottom, by commoners who care not a whit about trendy causes or making impressions. They’re simply focused on getting the job done and doing something incredibly practical and useful. They’re doers, not dreamers, though they have dreams, too. It’s just that their dreams are realizable, not fanciful. Oil and gas is heartland stuff and it comes with a culture all of its own, which includes oil and gas music. 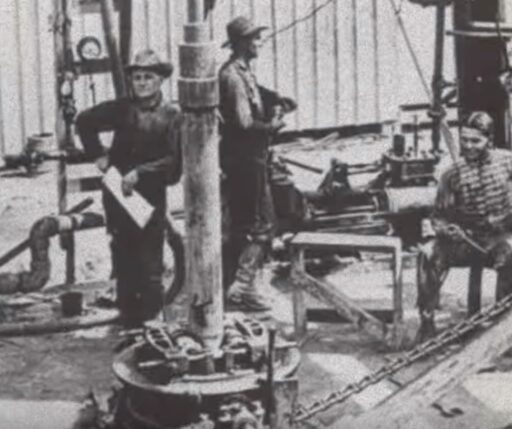 This oil and gas music honors roughnecks, of course, and Johnny Cash did a tribute to them with a 1963 song simply titled “Roughneck,” which was part of his “Blood, Sweat And Tears” album. The Carter Family was in on the song, the refrain of which was simply this:

One of the verses captures the essence of a roughneck better than the others, I think, with some words about what it means to be a real man, skinning the knuckles and ever crying, which is true practically and metaphorically, of course, especially IF you’re a Rudyard Kilpling fan as I happen to be:

Well, I started workin’ like a regular man
When I was just about knee high
Skinning the knuckles with my two bare hands
But they never heard me cry

Someone named “Oiyoo” used Johnny’s song to help tell the roughneck story through a combination of oil and gas music and imagery:

Unsurprisingly,”Black Gold” is a popular title for oil and gas music numbers. Trace Adkins, in fact did a promo song for a truTV show by the same name in 2008. The show ran through 2013, following the template for series such as Ice Road Truckers and Deadliest Catch. You can purchase the series on Prime Video. Adkins, who hails from Louisiana, reportedly “worked as a roughneck and derrickman on offshore drilling rigs in the Gulf of Mexico.” The lyrics for his song (we’re told there is a full song) seem impossible to locate but the refrain, “A lot of good men give their souls to black gold,” resonates in Adkin’s deep voice and his devil may care attitude doesn’t hurt either.

Another piece of oil and gas music titled “Black Gold” was apparently done by a Houston, Texas employee of the accounting firm KPMG by the name of Clyde Sites who produced by collaborating with others on-line through something called BandHub. The lyrics are too cyncical for my taste but the beginning captures a bit of the adventure in being a roughneck:

Here tomorrow, gone today.
That’s the words my dad would say.
Hell fire from down below,
Is the only thing left to go.
And the rigs are burning red,
Cloud of smoke above my head.
Harder times are left to go,
When the blood don’t bleed the blacker gold.
That’s what they call it, these rivers of oil beneath our feet,
It’s the pay dirt, they call the black gold.

Here’s the whole thing and I like the sound:

Then, there’s the “badass” version as one roughneck himself described this “Black Gold” song by someone named Chase, who I’ve had no luck tracing down. His lyrics are on the filthy side (that’s a warning for those of you from Susquehanna County) but they include these words, which again capture some of the spirit of oil and gas work:

Click to play the whole thing but be warned it is truly the “badass” version of Black Gold!

I must confess I really like that line “Working for the gold, working for the folks back home.” That’s what it’s all about for all of us who work for living and aren’t wasting our lives on spending daddy’s money pursuing trendy environmental causes as a way to assuage our sense of not being up to his abilities.

No doubt there’s still more oil and gas music titled “Black Gold,” but enough of that. There is another irreverent song by Wade Reeves, though, called “Oil Field Trash.” Reeves has a website where he tells us a little about his musical career, which is but eight years old (emphasis added):

Wade didn’t start playing music until 2012 when he released his debut album entitled “Somewhere Down The Road”. The first album was filled with the first songs he’d ever written, ballad heavy mixed with a few upbeat honkytonk tunes.

In December of 2014 he released his second album “Keep On Dreaming” which attained much greater success, topping the Billboard Regional Chart and narrowly missing the Billboard Top 40 Country Albums Chart. With “Haggard and Jones” being featured on many social media sites such as “We Hate Pop Country”, and “Oil Field Trash” becoming an anthem for the hard working folks in the oil and gas industry, the album continues to gain in popularity and has helped Wade expand his fan base and popularity in the industry.

His lyrics are along the same theme as the others in establishing the fact there is a roughneck culture that is both “badass” and tender toward loved ones at the same time; a celebration of good old-fashioned American resourcefulness together with rejection of political correctness in all its forms:

I’m taking all these pictures for my kids,
So, when I’m dead and gone,
They’ll know what Daddy did.
I’m spending half my life,
With no grass beneath my feet,
Call me oilfield trash, that’s alright with me.

‘Cause that’s a badge of honor in my roughneck family tree,

Keep that world turnin’, boys,
Make it go around, my son.

Then, there is Chad Cooke’s ode “Oil Man,” which offers up this melancholy verse:

This hard hat and steel toes on my feet,
Build a roughneck man that I’ll always be.
Yeah. I did it all for my family,
Rig up, rig down, this patch just might mean…

As these lyrics show, oil and gas music tells a story that matches the American spirit of adventure; the same sprit that brought Mayflower passengers here, took Lewis and Clark on their expedition and won World War II by storming the beaches of Normandy.

The best song at communicating that pioneer sprit, though, may well be the one the great Waylon Jennings sang with the Earl Scruggs Band as background for this video:

The first time on an oil rig,
I was lonely, I was cold,
It was a hundred men,
A lot of machines,
Like they were looking for gold.
Worked that hole for 80 straight days,
Till the stuff came up like a flood.
I don’t know what,
I don’t know how,
But a little drop got in my blood.

You live out here,
Like a pioneer,
Away from the easy places.
I got no friends ,
But the oil rig,
And these familiar faces,
No women, no wine,

Working all the time,
But satisfying me,
And, if there’s oil beneath my feet ,
This is where I wanna be.

Can’t do much better than that. I’m missing Waylon, aren’t you?