The company has already “significantly” cut staff through a voluntary program, spokeswoman Melissa Schoeb told Reuters. She wouldn’t comment on the number of employees to be cut or any potential earnings charges. The combined company had roughly 16,000 workers when it merged.

Occidental has been selling assets and cutting costs since it outbid larger rival Chevron in 2019 for Anadarko, quadrupling its debt to $40 billion.

In November, it said it planned to cut spending by roughly $3.6 billion in 2020, or by 40% of the 2019 total, and trim production goals to meet dividend and debt payments. Oxy’s third-quarter net loss was $912 million, compared with a $1.87 billion profit in the year-earlier quarter. The loss included nearly $1.3 billion in pretax acquisition costs and impairment charges.

On Monday, Oxy said it was moving forward with cutting its majority stake in former Anadarko investment, pipeline operator Western Midstream Partners LP, to less than 50% this year. That move would reduce debt on its books and make it easier to sell or spin off the business.

“Occidental’s integration team identified the jobs we need to successfully and safely operate our business and achieve our synergy goals,” Schoeb told Reuters. 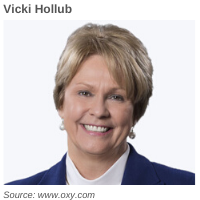 Layoffs could happen this week, the Houston Chronicle reported Wednesday, citing an internal email from CEO Vicki Hollub. Employees in Occidental Chemical and Gulf of Mexico business units would be exempt from the dismissals, according to the newspaper.

“While these (voluntary) programs have been successful and contributed significantly to our goals, we have determined that additional staff reductions are necessary,” Hollub stated in the email, the Chronicle reported. “A reduction in force program, based on business necessity by job, is being initiated with individual communications and exit dates.”

Hollub still faces a proxy battle with billionaire activist investor Carl Icahn, who wants to replace the company’s entire board and have it accelerate asset sales — or even put the entire company up for sale.

Occidental has raised roughly $10 billion so far via property sales, including a liquefied natural gas project in Mozambique and production in Africa. It recently agreed to sell Anadarko’s former headquarters and a Houston office complex for $565 million to real estate developer Howard Hughes Corp.