Pennsylvania Impact Tax Is About the Best Severance Tax Imaginable

The impact tax, or Act 13, continues to pay millions of dollars forward to support rural communities hosting the natural gas industry, and this year is no different.
In fact, with a grand total of $252 million from 2018’s Act 13 collection, this latest round of distribution by the Pennsylvania Public Utility Commission (PUC) marks the most money EVER distributed since the impact tax went into effect in 2012. 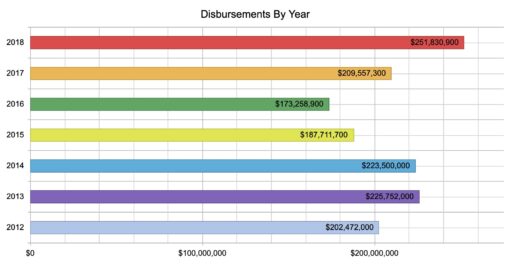 With the latest distribution, which was announced earlier this week by the PUC, the total amount paid forward by the natural gas industry is $1.7 billion.

But remember, we’re the only state without a severance tax. (Don’t worry, I rolled my eyes, too.)

Courtesy of the PUC, here are some of the regions across Pennsylvania that got the most of this year’s impact tax allocation.

Additionally, four municipalities (the townships of Center, Morris, Amwell and Franklin) each received over $1 million in Act 13 revenue.

The gas companies that paid out the most?

I cannot stress enough how important this influx of cash has become for local counties and municipalities. Here in my home county of Bradford, officials are using impact tax monies to build a state-of-the-art, $13.1 million public safety/911 center – a facility that is desperately needed and, frankly, a facility that 911 dispatchers deserve. The 25,000-square-foot building will also house the county’s planning office and sheriff’s office.
The county is also in the midst of construct a dark fiber internet service loop around the county.

As many who live in the Endless Mountains are aware, reliable, fast internet service is nearly impossible, and Bradford County is no exception, with average internet download speeds of 2.75 megabits – far below the federal standard of 25 megabits.

The dark fiber internet loop is also being paid for by the county’s impact tax reserves. This project would not be possible without it. Did I mention Bradford County has been able to take on this endeavors while not raising taxes in about a decade?

Sheshequin Township Supervisor Kurt Lafy on Thursday called the Act 13 revenue a “Godsend,” allowing his township to replace small bridges – which is an extremely costly endeavor for rural municipalities – at no additional cost to taxpayers.

The township also moved into a brand-new $850,000 municipal building three years ago thanks to the impact tax, allowing the township to store all of its equipment indoors for the first time ever.

Act 13 is working. While it looks like Pennsylvania has escaped another budget cycle without the addition of a severance tax, the issue will surely be brought up again before long. But there is no reason to double dip into the pockets of an industry that provides thousands of well-paying jobs across the state while also paying $1.7 billion in impact taxes, on top of the taxes that the companies pay just like any other business in the state. These rural communities need the boost provided by the impact tax, and they also appreciate it and use it more responsibly than any state agency would.