Pennsylvania royalty income to landowners conservatively topped $8 billion between 2010 and 2017, according the Commonwealth’s Independent Fiscal Office.

This is major unreported news. It’s about the overwhelmingly positive impact of the shale revolution on the Commonwealth of Pennsylvania; information that ought to send New York landowners to Albany with pitchforks, not that they didn’t already have a multitude of reasons to do so.

It’s about the fact Pennsylvania royalty income from gas drilling is conservatively estimated by the state’s Independent Fiscal Office to have been nearly $8.3 billion between 2010 and 2017 and is expect to reach $10 billion when the 2018 numbers are calculated. That’s $10 billion that went right into the pockets of landowners who spent it and multiplied the benefits to places such as Susquehanna County that were going nowhere prior to the shale revolution. 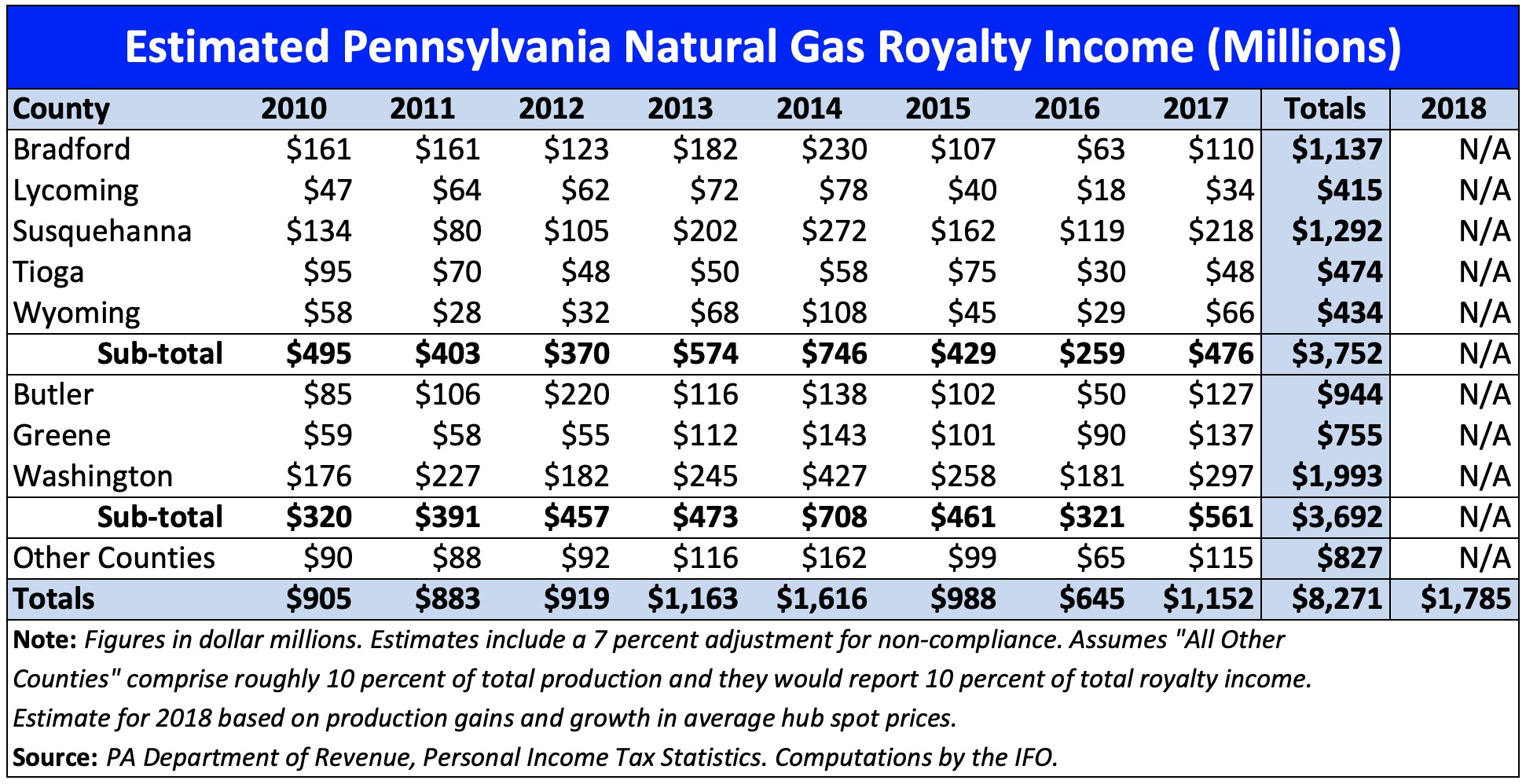 The Independent Fiscal Office is self-described as follows:

The Independent Fiscal Office (IFO) provides revenue projections for use in the state budget process along with impartial and timely analysis of fiscal, economic and budgetary issues to assist Commonwealth residents and the General Assembly in their evaluation of policy decisions. In that capacity, the IFO does not support or oppose any policy it analyzes, and will disclose the methodologies, data sources and assumptions used in published reports and estimates. The IFO will seek to establish collaborative relationships with the General Assembly, executive agencies and various non-governmental organizations that have an interest in the policy making process.

Pennsylvania royalty income from gas drilling was the subject of a recent report by this agency. It can be downloaded from here. The table above is recreated from the one in the report and tells a marvelous story, but it’s important to understand a few things at the outset, which set forth in the report (emphasis added):

The estimates from the table represent a lower bound for natural gas royalty payments for two reasons:

■   There may be cases where leaseholders reside and file returns from counties (or states) other than the land under contract and do not reside in one of the top eight producing counties shown in the table. This outcome would cause the methodology used to understate royalty payments.

…For tax year 2018, the analysis projects a further increase in royalties paid to Pennsylvania landowners.

Compared to 2017, the average spot price at major Pennsylvania hubs increased by more than one-third, while total output increased by 14 percent. If those gains were passed through to landowners, then royalty payments would increase by roughly 50 to 55 percent. The projection assumes that extraction firms deduct a similar amount of post-production costs in 2018 as deducted in 2017.

That’s pretty amazing in itself, but consider, also, the following facts we’ve gleaned from the data, organizing it and comparing to Census data:

What’s even more important is that this Pennsylvania royalty is going to continue for several more decades and, eventually, Susquehanna County will not only catch up but surpass the Commonwealth. It was behind almost 19% in 2010 and, by 2017, was less than 12% behind. That’s how you revive a rural economy. What a shame New York has a governor blind to this reality.