Pennsylvanians Saying No to Wolf and Regional Greenhouse Gas Initiative

Tom Wolf, a preening example of political correctness if there ever was one, wants to put Pennsylvania into the crazy Regional Greenhouse Gas Initiative.

The reaction was swift–on both sides of the issue. Reaction against the plan continues. The Indiana County, Pennsylvania Board of Commissioners recently adopted a unanimous resolution against Wolf’s foolish plan, laying out in dollars and cents the very high cost such a plan will have on the county (in lost taxes and lost jobs).

The Regional Greenhouse Gas Initiative is a coalition of looney-lefty northeastern states — Connecticut, Delaware, Maine, Maryland, Massachusetts, New Hampshire, New York, Rhode Island, and Vermont, with New Jersey in the process of rejoining — who have locked arms and decided to jump off the climate cliff together. If power plants using fossil fuels, like natgas-fired plants, want to keep operating in those states, they will have to buy credits (i.e. pay high taxes) to do so. Wolf wants to make gas-fired power plants in Pennsylvania do the same. It will force many of them out of business. 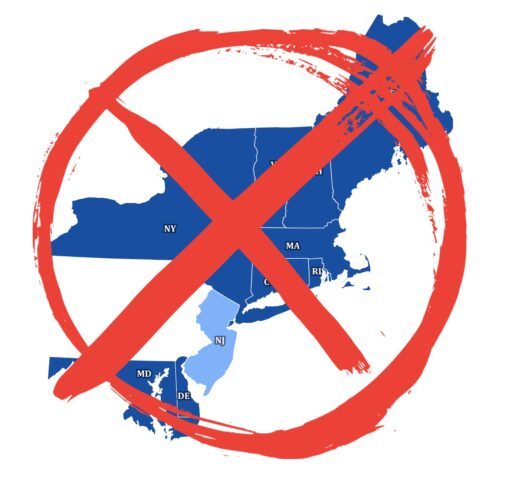 Here’s what Indiana County says will happen to the county if Wolf persists in forcing Pennsylvania to join RGGI (emphasis added):

While matters of energy generation strategy and environmental quality standards often prompt political leaders to draw lines of division, the fate of Indiana County’s workforce and local economy prevailed amid an air of unity Wednesday as the county board of commissioners stood opposed to the Regional Greenhouse Gas Initiative being advanced by Gov. Tom Wolf.

The commissioners unanimously backed a resolution of opposition to enactment of what’s being called the “Reggie” cap-and-trade program that targets electric power plants by imposing taxes on coal, coal refuse and natural gas-fired electricity in Pennsylvania.

The resolution laid out the stakes for Indiana County should the burden of taxes be enacted: An estimated 6,400 megawatts of local power generation capacity would be transferred to non-fossil-fuel plants in other states — tax free — putting 1,225 jobs, $59 million of power plant payroll and $1.36 billion of overall economic impact at risk…

“A tax on natural gas, coal and coal refuse generation would be counterproductive to Pennsylvania’s economy and specifically impact communities like Indiana County, which would be economically devastated by electric generation plant closures,” Commissioner Rodney Ruddock read from the resolution, which urges Wolf to rescind Executive Order 2019-07 and to “work collaboratively with the General Assembly and communities who rely on the economic benefits of electric generation before considering member in RGGI and the implementation of a carbon tax on emissions.”

…Ruddock added that the resolution also signifies a call for education of the public and political leaders to the potential impact of “Reggie” on Indiana County and other communities that would face plant closures.

“I support this resolution because (the initiative) could have devastating effects on local economies, and because I support the workers that are involved in this industry,” Hess said.

State Sen. Gene Yaw, R-Loyalsock Township, remains unconvinced that the state’s joining with the Regional Greenhouse Gas Initiative (RGGI) is in the best interests of Pennsylvania.

The local lawmaker met earlier this week with the Senate Environmental Resources and Energy Committee to discuss the initiative put forth by Gov. Wolf and to consider pending legislation unrelated to that issue.

Yaw, who chairs the committee, said the state isn’t on the same page with other RGGI states such as New York and New Jersey.

“We are going in partnership with states not friendly with us marketing our natural gas. Every one of those states has denied permits and pipelines for gas,” he said.

Yaw referred to the state as a net exporter of energy.

Pennsylvania, he said, should not simply surrender much of its control for production of natural gas to those states. The state has more in common with non-RGGI and gas-producing states such as Ohio and West Virginia and perhaps should be working with them on some other type of plan…

Notice at the end of the article Yaw is backsliding with respect to supporting, then not supporting, now supporting again a severance tax. Yaw is a swamp-dweller–a political insider that needs to go. ‘Nuff said. At least he remains against RGGI–that is, until he’s for it.

Finally, Katie Klaber, managing partner of The Klaber Group (and founding president of the Marcellus Shale Coalition) had this to say about RGGI:

Earlier this month, Pennsylvania’s Gov. Tom Wolf signed an executive order committing Pennsylvania to the Regional Greenhouse Gas Initiative (RGGI), joining other northeastern states to reduce greenhouse gas emissions from the power sector. This action requires the state’s Department of Environmental Protection to develop regulations from fossil fuel-fired electric power generators, which will increase the price of energy for all Pennsylvanians. Although the press release touted “generating economic growth” as a benefit, the opposite will be true for western Pennsylvania. We will once again have a competitive disadvantage to overcome with Ohio and West Virginia.

I see several major problems with this action. First, though the current political climate has compelled the Wolf administration to join eastern states in their approach to global climate change, Pennsylvania has already achieved much more substantial progress from the migration to using our natural gas resources. If the administration were honest about emissions reductions, it would be acknowledging the major reductions in carbon and other compounds like particulate matter and nitrogen oxides that have come from the use of Pennsylvania’s natural gas, a much larger contribution to global carbon reductions than RGGI will ever be.

Second, if RGGI is really targeting greenhouse gas emissions from the power sector, why doesn’t it include the manufacture, deployment and operation of alternative energy sources? It takes plenty of fossil fuels to manufacture and operate wind turbines. Solar panels require the energy-intensive conversion of sand into high-grade silicon and many other steps in the manufacturing process that use fossil-fuels. It is time that the public understand that alternative energy sources have their own life cycle emissions that must be accounted for – they aren’t zero-emissions options…

It may further burnish the Wolf administration’s green credentials in the eyes of special interest groups. But it will squander the emerging opportunities that western Pennsylvanians are beginning to enjoy.

Wolf’s action to force Pennsylvania to join RGGI must be stopped, plain and simple.