Phillip Flagg, Radical Son with No Job, Is the Epitome of the Fractivist

Phillip Flagg is a radical 25-year old fractivist with no job but a serial protesting career of seeking attention under the guise of being morally superior.

Our buddy Jim Willis of Marcellus Drilling News put a rather intriguing post the other day about a 2:00 AM drum-beating fractivist protest at the home of the outgoing CEO of EQT, Robert McNally. It was as juvenile as it gets. Jim quoted a story in the Pittsburgh Business Times to make his point this was nothing less than terrorism and he’s correct. What interested me most of all, though, was the fact the only name associated with this outrage was an individual by the name of Philip Flagg. He’s from Austin, Texas and is only 25 years old or so. He’s also proud he has no job. Such is nature of fractivism. 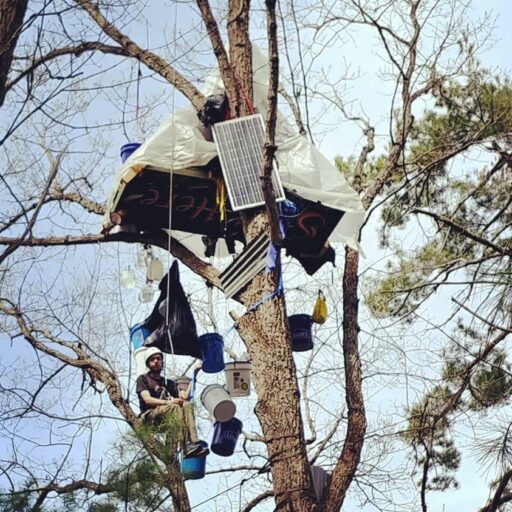 Phillip Flagg in his tree before he came down to conduct a 2:00 AM protest in from of an outgoing CEO’s home

I always want to know more about the individuals involved in fractivist protests because I know how it usually turns out and it’s important the public know who these people really are. Philip Flagg, like so many others, is a serial protester. Here is an adoring profile from the extremist PopularResistance.org reporting on Phillip Flagg’s participation in a Mountain Valley Pipeline tree-sitting protest (emphasis added):

For almost five months, Phillip Flagg has been living in a chestnut oak tree 50 feet above the ground. His home is a four-by-eight sheet of plywood, a little larger than a typical dining room table, that is lashed to the oak’s boughs. Since going aloft on October 12, he has not set foot on the ground. Below him there’s small group of about a dozen scrupulously anonymous young people who take care of Flagg’s basic human needs. They’re all here to halt the construction of a natural gas pipeline in rural Elliston, in the Virginia highlands near Roanoke. For many of them, organizing, staffing, and supporting long-term eco-protests like this is as a way of life.

Unlike his campmates, Flagg, a 24-year-­old native of Austin, Texas, doesn’t mind revealing his identity. Before Yellow Finch, as this particular tree-sitting exercise is called, he participated in two other “action camps.” He was also at Standing Rock, the much-publicized protests that erupted in 2016 in an effort to stop the construction of the Dakota Access Pipeline. But that doesn’t really count, he insists: “Everyone was at Standing Rock.”

The Yellow Finch action camp, named after a nearby road, is trying to block the proposed Mountain Valley Pipeline (MVP), a 300-­plus­‐mile underground pipeline that would transport natural gas extracted by hydraulic fracturing, or “fracking,” from shale in the Appalachian regions of Pennsylvania, West Virginia, Ohio, and New York…

Yellow Finch is the latest in a series of tree-sits, or “aerial blockades,” of MVP, with the first beginning in February 2018. It may also be the longest ongoing blockade for this project, so far. About eight others have occurred at different sites along the pipeline route, supported by organizations such as Appalachians Against Pipelines; all have been shut down through legal processes. But Yellow Finch endures, in defiance of Mountain Valley Pipeline, LLC, and the elements. In his months in the treetops, Flagg has so far endured single-digit temperatures, snowstorms, ice, rain, and even a hurricane. He’s protected only by tarps and a rain fly, leaving him just enough room to stand up under the peak. He worries about lightning strikes, but only “in a sort of vague way,” he says. “I’ve never heard of a tree-sit being struck by lightning.”

…To Flagg and his cohort, an “activist” is a broad term that can include people who live and toil in the mainstream and go to marches. What the Yellow Finch camp does represents a different level of commitment to direct action. “I do activism,” he says, “but I wouldn’t call myself an activist.” They offer up another label for who they are—“dirty kids.” But they take pains to distinguish themselves from dirty kids who do drugs and go to music festivals. “We look like them, but we actually do stuff,” one protester tells me.

Flagg explains to me why he’s here: “We’re actively creating a different world while simultaneously fighting the dominant culture,” he says.And the world they’ve built here in the wintry woods offers a kind of sylvan idyll, a temporary utopia of the donated and scavenged. For the young people who choose to call it home, an eco-protest encampment can also serve as a kind of intentional community for aficionados of off-the-grid living.

“We don’t pay rent; we don’t buy food; we don’t have jobs,” says another protester, my guide on my visit to Yellow Finch. “We’re real happy.”

That’s nice isn’t it? No job, someone else paying the bills and lot’s of fawning publicity that never exposes what a bunch of spoiled brats you are.

And, of course, Phillip Flagg supposes he’s of superior moral authority and has a right to harass an entire innocent family at 2:00 AM with drums, simply because he disagrees with the position of one of the members of that family. Entitlement comes with the territory when you’re a fractivist. Here’s how he explained that one:

One protester, Phillip Flagg of Virginia [actually he’s from Austin, Texas and lives in San Antonio according to his Facebook profile], told the Business Times that the demonstration was for two reasons: hydraulic fracturing like the kind EQT does to produce natural gas in the Marcellus and Utica Shale, and the pipelines that are being built to carry that natural gas.

“Pretty much the existence of EQT,” said Flagg of the reason for the protest. Flagg said he wasn’t at the McNally protest earlier in the day.

While EQT owns about 20 percent of Equitrans Midstream as a result of its November 2018 split into EQT and Equitrans, both are separate publicly traded companies with a separate executive team and board of directors. McNally, who was the former CFO of the combined EQT, had nothing to do with the Mountain Valley Pipeline’s construction since the companies split.

“You exist and, therefore, I protest your existence” says the self-righteous Phillip Flagg in so many words. But, there’s a lot more to learn about on Phillip Flagg on his Facebook page, including this insightful perspective from last year:

Basically everything useful in the world from the raw materials, the factories, the transportation systems, and the distribution points (what we call stores,) are owned by a small group of people that operate said things to make themselves wealthier. This group, or class, of people effectively owns the world. Given this arrangement is the condition of the world any surprise?

I could go on but the pattern holds. Of course our society isn’t the best at maximizing human wellbeing! Why would it be? That was never the point. The basis of our entire society is f…… up and obviously needs to be changed. Instead of everything useful being privately owned to make a few people richer everything useful should be owned by all of us together. Not to make any individual person richer but to make all of our lives better.

Seeing the world in this way makes me feel quite insane. My species is rapidly destroying itself because it’s trapped in an imaginary system that will clearly result in misery and always has. People are fighting for change but even as they do so they often fail to even see the nature of their own society. They seek to win better treatment from the owners or to curb their worst offenses but never question why society should be arranged in this way to begin with.

It doesn’t have to be this way. All that has to happen for the system to change is for enough people to look around and really ask, “who owns all of this?”

This is the very definition or epitome of the “useful idiot,” is it not? Phillip Flagg is an unemployed spoiled child who imagines the world owes him a living and that collectivism, which has failed and delivered incredible misery every time it’s been tried, is somehow the answer. It is the mindless babble of a child, but one who is 25 years old, not 12, and should be supporting himself. That’s who’s doing the protesting around the country, going from one event to another, living the revolutionary dream with someone else’s money and at everyone else’s expense.

So why wasn’t he arrested? Not that he wouldn’t love the publicity, of course? It’s because we have a tolerant legal system, but elites who manipulate these spoiled entitled children like it that way. Consider, for example, this advice from a law firm that apparently loves this kind of activity and warns pipeline companies against legislation that would prohibit it:

Additionally, Guiding Principle 13 states that businesses must “seek to prevent or mitigate adverse human rights impacts that are directly linked to their operations, products or services by their business relationships, even if they have not contributed to those impacts.” Taken together, these standards suggest that companies should not support changes to law that would violate the right of community members to oppose pipeline projects that have potentially deleterious impacts on them, or unduly subject such individuals to criminal penalties for doing so.

This is utter madness, of course, and it comes from a U.S. hating U.N. eager to encourage vandalism, family harassment and the like here in the U.S. to help other countries such as Russia slow our shale revolution until they catch up.

This what we face today with Phillip Flagg types and it won’t stop until someone protests in front of his home or his family’s at 2:00 AM, at which point the tables will immediately turn; except that we don’t do that sort of thing. we’re adults, after all.