Garland Thompson tells us not to be distracted by pipeline blockades in the politically correct Northeast because shale gas is headed south in a big way.

The activists yelling “Keep-it-in-the-ground” outside facilities like Dominion Energy’s Chesapeake Bay gas terminal, like the 60 lawmakers who wrote Gov. Larry Hogan demanding that he block that line, needed for a new industrial plant, are sadly mistaken if they cheer.

That gas, pouring out of Pennsylvania Marcellus Shale wells, will get to market anyway.

For while activists across the Mid-Atlantic states celebrate blockades, the real nuts-and-bolts business of marketing America’s shale gas bounty to the world – winning business growth, jobs, profits and tax revenues processing and selling that gas – is getting done in other regions. 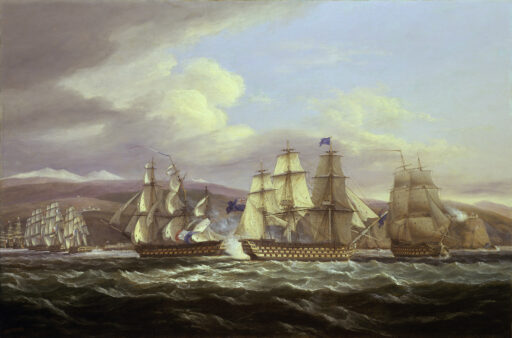 What a blockade looked like back in the day; now it’s done with a pen by petulant politically correct politicians.

Case in point: New York’s Gov. Cuomo has barred the proposed Constitution transmission line’s march across the Empire State to supply gas New England badly needs. [Editor’s Note: Due to a recent FERC decision, that is going to change.]  The region’s electricity plants burn gas in warm months, but switch to coal and fuel oil in winter. Utilities shut them off so consumers can have heat.

New England has few pipelines, so Boston gets gas on seaborne tankers, until recently from Trinidad, which switched to the Pacific Rim via the expanded Panama Canal. The Canal Authority says Trinidad sells more than 1.3 trillion tons of LNG a year to Asia, Mexico’s west coast and Chile. Boston began buying Russian gas.

The Boston Globe questioned gas buys from a much-criticized Siberian Arctic source, but Boston didn’t have a choice. Other nations had bid up spot LNG prices, and it’ll likely get worse.

The kicker here is that Gulf Coast marketers have plenty of gas to sell – much of it from Pennsylvania — pushing out LNG and liquefied petroleum gas to world markets, and they sell even more to Mexico: The U.S. sold the biggest share of the 3.1 million tons of LNG Mexico bought last year, the Canal Authority said. In fact, American gas rode most of the tankers making 10 percent of 2018’s total waterway transits. Liquefied petroleum gas was the big winner: 27 percent of the ships transiting the new locks last year were LPG tankers, most from the U.S.

Activists in Maryland or, pointedly, Pennsylvania, where America’s most prolific “fracked” gas wells lie, might wonder what that has to do with anything. The answer: Everything.

So much of that gas leaving terminals in Louisiana and Texas, from Dominion’s Cove Point on the Chesapeake, and even Kinder-Morgan’s new Elba Island LNG plant off Savannah, Georgia, comes from Appalachian “fracked” wells, in Pennsylvania, West Virginia and Ohio, the  bespoke “Shale Crescent” states.

That gas evades activists’ blocking of Northeast pipelines, because Oil Patch executives have a workaround: New pipes now connect to ones built generations ago to take their gas North, now to ship that fracking bounty South.

The plethora of pipeline names can be confusing, but their impact is major. The energy blog Marcellus Drilling News, discussing an RBN Energy report that outlines “how Marcellus/Utica gas hitches a ride to the Gulf Coast” recently revealed this:

“TC Energy’s Columbia Gas and Columbia Gulf natural gas transmission systems’ expansions out of the Northeast – the Mountaineer Express and Gulf Xpress projects, both completed in March, are responsible for a large portion of the [recent big] uptick in Marcellus/Utica production . . . they’ve added . . . 860 million cubic-feet-a-day of capacity for Appalachian gas supplies moving . . . to the Gulf Coast.”

The Leach Xpress, which made headlines when a landslide broke its pipe, hooks up to the Columbia Gas System to get Appalachian gas to Louisiana’s Henry Hub pricing center. More than 1 billion cubic-feet-per-day of Shale Crescent gas flows down.

In the Northeast, protests and legal challenges greet every pipeline as if blocking completion is the be-all and end-all of environmental protection, but from this vantage, it looks more like a NIMBY refusal to permit development in an area hurting for business and jobs growth.

Shale Crescent USA, citing Appalachia’s new importance, showed up at a recent Pittsburgh energy conference, saying the combo out-produces Texas in gas, and that its growth moved the U.S. from world’s biggest gas importer to zoom past Russia, the Persian Gulf, the North Sea, Asia and Africa to be No. 1.

The organization’s web site, www.ShaleCrescentUSA.com, says if its three states were a country, they’d rank third behind No. 2 Russia.

No shale or jobs in their back yards

The region’s biggest population instead watches news reports of job growth “upstate” and in western counties, amid stories of billion-dollar Gulf Coast investments to process Pennsylvania natural gas liquids and prepare “dry” methane for export, while no growth comes their way.

Maryland activists may celebrate halting a 3.5-mile pipe planned to feed a West Virginia industrial plant, but they, too, live in an area sorely in need of job growth, while others prosper with the energy products they themselves use in cars, homes and offices every day, resources they still want kept in the ground.