Regional Greenhouse Gas Initiative on the Fast Track to Nowhere

Politicians love schemes showing them to be doing something, especially when no one can decipher it. The Regional Greenhouse Gas Initiative is such a scheme.

Yes, the pols are always eager to stick their noses in things and make themselves look like problem-solvers. The less the public is able to understand it, the better. That way no one can direct effective criticism toward it; only the good intentions make it into the media and that’s just perfect.

The Regional Greenhouse Gas Initiative is such a scheme. The goal of reducing greenhouse gas emissions comes through loud and clear but few are able to discuss the complex details, so criticism is effectively muted. Some do know, though, and what we are learning is that the Regional Greenhouse Gas Initiative is on the fast track into the abyss, unless the program is modified and this could be important to gas.

The Regional Greenhouse Gas Initiative is “the first mandatory market-based program in the United States to reduce greenhouse gas emissions. RGGI is a cooperative effort among the states of Connecticut, Delaware, Maine, Maryland, Massachusetts, New Hampshire, New York, Rhode Island, and Vermont to cap and reduce CO2 emissions from the power sector.” 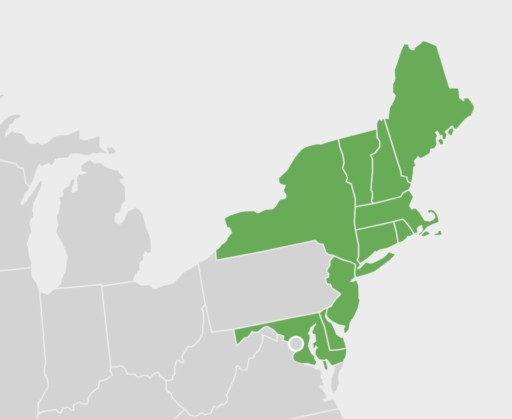 The goal is simple and the method is one that effectively forces electric power producers in these states to use increasing amounts of renewable energy. You can read how it happens here, but your eyes will quickly glaze over, which is why few even discuss it. One who does understand and discuss it is Roger Caiazza, an independent researcher and the publisher of the blog Pragmatic Environmentalist of New York. I ran a guest post from him last week, in fact, talking about Andrew Cuomo’s version of the Green New Deal.

Roger’s latest post on his site, found here, digs into the weeds of the Regional Greenhouse Gas Initiative. It’s heavy stuff, but Roger makes some very important points about where the whole thing is headed (emphasis added):

I have been involved in the RGGI program process since its inception. Before retirement from a non-regulated generating company, I was actively analyzing air quality regulations that could affect company operations and was responsible for the emissions data used for compliance.

After years dealing with RGGI I worry that whether due to boredom or frustration, that there is very little dissent to the program. It may be because, contrary to EPA and State agency rulemakings, RGGI does not respond to critical comments and rebut concerns raised by stakeholders.

After years of making comments that disappear into a void, industry does not seem to think there is value to making comments. The opinions expressed in this post do not reflect the position of any of my previous employers or any other company I have been associated with, these comments are mine alone.

RGGI Annual CO2 Emissions lists the total CO2 emissions from the states currently in RGGI. After pretty consistent reductions over time last year there was a six million ton increase from 2017…

I have previously posted on the reductions to date which suggest that further reductions will be much more difficult than in the past.

RGGI is a cap and auction program. Allowances are sold in quarterly auctions to anyone and the proceeds are supposed to be invested in programs that reduce CO2 or ratepayer impacts. RGGI states have modified the original auction allocations to reduce the number or bank of the allowances that have been purchased but not used yet because the original estimate did not account for the possibility that natural gas would supplant coal to the extent observed. Up to this point the affected sources or compliance entities have been able to purchase the allowances needed to cover emissions from auctions. This is going to change in the next couple of years.

RGGI relies on Potomac Economics to provide technical analyses. Frankly, my impression is that the purpose of those reports is to obfuscate and confuse rather than clearly show the status of the program. One of my biggest frustrations is that there is no summary status report and I have inconsistencies in my summary estimates. I have made a couple of guesses at the status of the number of allowances that are held for compliance purposes after the 2018 RGGI emissions are fully surrendered…

I cannot emphasize enough that RGGI is headed towards a situation where the affected sources will have to go to the non-compliance entities to get enough allowances to cover their emissions. If you recall the proceeds that RGGI receives from the auctions are supposed to be used to reduce emissions and provide ratepayer relief. Ideally, the added costs of this carbon tax are offset by those investments. Now, however, the investors will be able to charge whatever they want for the allowances and their profit will be covered by increased costs to the consumer. (In the interests of full disclosure I bought 11,000 allowances in 2018 and will profit from this situation.)

For those of you who want to dig deeper, please visit Roger’s site. Let me summarize how I see it in layman terms:

It’s all quite fascinating when you think about it. Unsubsidized natural gas and the private market have accomplished so much in terms of reducing greenhouse gases that the Regional Greenhouse Gas Initiative is now essentially superfluous. No worries, though. The inertia and will to survive inherent in all bureaucracies will, undoubtedly, force this one to raise its allowances again or take some other measure that recognizes the reality; that there is no faster way to reduce emissions than natural gas. Perhaps it will even lead to it accept natural gas as a complying source if fuel. That would certainly put a different spin on Andrew Cuomo’s anti-fracking and anti-pipeline maneuvers, wouldn’t it?

Thanks, Roger! We needed that.