Renewable Energy Is A Losing Proposition: End the Subsidies

[Editor’s Note: Renewable energy subsidies have supported an industry that is completely uneconomic and unsustainable and the time is past to end them.]

Four years ago, after the election of Donald Trump, I contacted the head of the editorial page of the Houston Chronicle requesting a visit with the editorial board to introduce myself, the Institute for Energy Research (IER), and the classical-liberal worldview applied to energy. I got no response.

I then resent the request and got a curt no caps rely from the gentleman as in don’t-have-time-for you. I then responded with the fact that IER was a go-to Trump think tank, and my being the founder and from/in Houston would add interest. His final response: ‘we can’t take all comers.’ 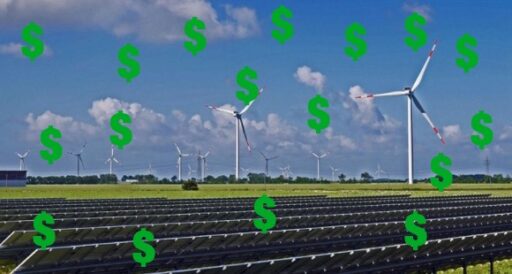 Subsequently, several attempts to publish op-ed’s in the Houston Chronicle were unsuccessful, a story for another day. And in the last four years, the hometown paper has gone militantly anti-fossil fuels. I wrote this 18 months ago:

During the day, Houston, Texas, bustles as the oil and gas capital of the world. The daily business fare, as reported by the hometown Houston Chronicle, is a new offshore project here, new refinery or petrochemical plant there, new onshore production plays elsewhere. And then there is a whole new industry within an industry, LNG exports from Texas and Louisiana to distant ports–and even LNG tank cars crossing into Mexico.

But on the Chronicle editorial page, an alternative reality plays out. Some years ago, as documented by former Chronicle reporter Bill Dawson, the Houston Chronicle has gone Left–hard Left. The no-conservatives-no- libertarians-allowed editorial board delights in sticking it to the fossil-fuel industry.

Given the gap between reality and Green New Deal fantasy, it is worth remembering the exceptions to the Chronicle’s bias. This brings me to an op-ed by Bill Peacock, then with the Texas Public Policy Foundation, in late 2018, Is it time for the political fall of renewable energy? This piece by Peacock, a principal here at MasterResource, follows in its entirety.

At the end of October, several electricity generators and wind industry representatives teamed up to ask the Public Utility Commission of Texas to impose an electricity “tax” on Texas consumers of up to $4 billion a year in order to increase their revenues.

Their reason for asking for this new tax? They don’t think they make enough money.

Rather than pushing the PUC and the Texas Legislature to eliminate one of the main reasons that some of them are taking a revenue hit, renewable energy subsidies, they decided to ask for subsidies themselves.

To understand why this is happening, let’s back up a bit.
In our new paper, “The Economic Fall & Political Rise of Renewable Energy,” Robert Bradley, Jr. points out that from the beginning of history, renewable energy held a market share of about 100 percent. But over the last 300 years, that market share dropped to nearly zero in the developed world, except where water was abundant.

This happened because renewables like wind and solar are unreliable, inefficient, and expensive sources of energy. And when something better came along, i.e., fossil and nuclear fuels, the market all but eliminated them from the fuel mix.

This began to change in the 1970s when politicians and energy experts became (wrongly) convinced that we were running out of oil and gas. So, they started to pour billions of tax dollars into synthetic fuels, electric cars and renewables.

Yet, as Bradley writes, “despite a four-decade effort, wind power, solar power, and ethanol are still not competitive against conventional carbon-based energy. Electric vehicles are also uneconomic on a stand-alone basis compared to the internal combustion engine.”

Renewables will never catch up to modern, efficient sources of energy. But this hasn’t stopped federal, state and local governments from continuing to force consumers and taxpayers to subsidize renewable energy companies, making energy in American less affordable and reliable in the process.

Unfortunately, Texas is a national leader in this effort.

Texas built $7 billion worth of “CREZ” transmission lines to benefit wind and solar farms located far from population centers; Texas electricity customers pay down this debt every month, with interest, on their electric bills. Mandates to purchase renewable energy have added another $500 million. We’ve also paid close to $1 billion more to connect renewable generators to the grid.

Local tax abatements (Tax Code Chapters 312 and 313) have reduced property tax revenue by more than $500 million. And the cost of federal subsidies (stimulus payments and the Production Tax Credit) to renewable generation in Texas have topped $6 billion.

Add it all up and renewable energy generators in Texas have reaped close to $18 billion since 2006, all of it coming out of the pockets of taxpayers and consumers.

Despite all the money we’ve been forced to pay these and other companies, it still is not enough, as witnessed by the energy generators operating in Texas — most generators have both conventional and renewable assets — going to the PUC to ask for another $4 billion per year.

They claim that if Texas doesn’t force consumers to pay them higher prices for electricity, the lights will go out. But they made the same claim back in 2012.

These companies seem to hope that a sympathetic PUC may force this electricity tax on consumers. But this should not be the PUC’s decision to make.

If Texas is going to abandon its world-class competitive electricity market and force consumers to pay generators another $4 billion a year, that decision should be made by the Texas Legislature and the governor.

But it need not come to that; the way to improve our tight — though sufficient — electricity reserves is through the market with less subsidies, not more.

The PUC should end operating procedures that favor renewable generation, such as subsidizing their transmission and allowing them to fail to dispatch electricity when needed without penalty. The Texas Legislature should end local 312 and 313 tax abatements for renewable generation and mandates for purchasing electricity from renewable sources. And it should tell the PUC to eliminate the distortions caused by the PTC.

Markets have already declared renewable energy outdated. It is time for policy makers to do the same.

Has Peacock’s op-ed aged well? To ask the question is to answer it. Politically correct wind and solar remain government dependent and a bane to consumers and taxpayers. Wind and solar are crony industries, an unsavory aspect of American capitalism today.

And, factoring in the environmental drawbacks of wind and solar, the question must be asked: when will Big Environmentalism notice and concede to the grass-root environmentalists who must live with all the land, steel, concrete, motion, and noise of dilute, intermittent energy.

Reposted, with permission, from the MasterResource “Free Market Energy Blog.”