Renewable Mandates Have Forced California to Power Down

California’s rolling power outages are not the result of resource deficiencies but, rather, ridiculous renewable mandates and mismanagement of forests.

California has some of the most aggressive mandates for renewable energy production in the country. The state has a 100 percent “clean” energy mandate by 2045, with 60 percent of the state’s electricity mandated to come from renewable energy by 2030. All new houses built in the Golden State must have solar panels on the roof, and several cities (e.g., Berkeley) have banned the use of natural gas in new residential construction.

Increasing amounts of wind and solar on the California grid have caused reliability problems, with millions of people forced to endure days without power to alleviate wildfire risk believed to be caused by wind damage to electrical wires and insufficient back-up power when wind and solar are not producing.

Because of potential power shortages, California utility regulators have ordered electricity providers in the state to secure an extra 3.3 gigawatts of low-emission generation resources by 2023, with half of those resources in place by 2021. No new fossil-fueled resources are allowed to count toward the procurement obligations at sites without previous electricity generation facilities.

Along with insufficient resources, the regulators cited uncertainty created through historically high reliance on imports, an increased amount of wind and solar power which are not often available during peak demand, and the retirement of natural gas plants as factors for the decision. According to the regulators, the actions are needed to support grid reliability “while keeping the electricity sector on a path to meeting the state’s clean energy goals.”

The graph below shows that California’s peak electricity demand occurs after solar power diminishes as well as its heavy reliance on natural gas generation and imported electricity generated from fossil fuels (natural gas and coal) and nuclear power plants in Arizona and Nevada. The graph depicts the generation profile in California on October 3, 2019. The orange area is solar generation, the light blue barely visible area is wind generation, the deeper blue area is hydropower, the pinkish area is natural gas, and the brown area is imported electricity. 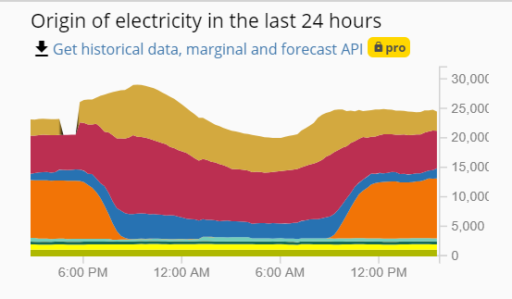 Source: Center of the American Experiment

Because the increasing wind and solar generation in California are causing reliability issues, grid operators issue contracts that pay natural gas plants to prevent them from closing, attempting to ensure that there is enough reliable electricity when renewables are not producing energy.

Paying for the wind, solar, natural gas and imported power is expensive, resulting in California electricity prices, on average, being almost 60 percent higher than the national average in 2018. And they are continuing to increase. In 2018, they averaged 16.7 cents per kilowatt hour and through August of 2019, they averaged 16.93 cents per kilowatt hour—about 2 percent higher than the same time period in 2018.

The power shortage will probably get worse in California as the Diablo Canyon nuclear facilities are phased out—a non-carbon emitting power source—in the coming years, and more renewables are being mandated on its grid. Diablo Canyon currently meets the needs of almost 3 million California residents. Pacific Gas and Electric (PG&E), the owner of those nuclear units, is cited as the cause of recent wildfires and it has had to temporarily order power outages to avoid further fines for wildfire liability that have resulted in its need to file for bankruptcy.

California’s Supreme Court ruled that utilities must cover the costs associated with electricity-caused wildfires regardless of whether they were accidental or the result of negligence. As a result, PG&E has resolved to preventatively cut its services when hot and dry Santa Ana winds could bring on brushfires.

The power outages have resulted in extreme hardships to many. “Perishable foods have been lost, costing individual households and restaurants tens of thousands of dollars. Hundreds of schools have been closed with little or no warning. The estimated 30,000 Californians who are sick or infirm and do not have access to gasoline-powered backup generators were left without functioning medical equipment.” Further, the rush to buy generators powered by gasoline or diesel has resulted in more carbon dioxide emissions in total.

With the push for renewable energy and its associated costs, PG&E and other power providers in California lack the resources to build extensive networks that could pinpoint fire-prone areas or insulate transmission lines. Even so, most wildfires are not caused by faulty electrical equipment but natural factors and human error. California’s utilities are required by law to provide services to housing in high-risk areas, which happen to be overburdened with trees and brush that contribute to the danger.

Because of the state’s acute housing shortage, more and more residences are built inside danger zones. Further, the responsibility for forestry management is covered by many interests–federal, state, local, tribal, and private—that have encountered the state’s onerous regulatory environment.

A 2018 study found that “overcrowded forests” have contributed to the destruction of vegetation, causing forest floors to contain combustible fuels. The report blames current forest management practices for imposing “limitations on timber harvesting” and “environmental permitting requirements” that “constrain the amount of trees and other growth removed from the forest.”

California is home to massive, rolling power outages that are not the result of resource deficiency but rather the result of California’s policies and mismanagement of its forests. Other states should take notice of what is transpiring in California and ensure that they do not follow suit.