[Editor Comment: Roger takes a hard look at RGGI investments and finds, based on the entity’s own standards, that they generate extraordinarily poor returns for ratepayers.]

This is the third installment of my annual updates on the Regional Greenhouse Gas Initiative (RGGI) annual Investments of Proceeds update.  This post compares the claims about the success of the investments against reality.

I have been involved in the RGGI program process since its inception.  I blog about the details of the RGGI program because very few seem to want to provide any criticisms of the program. The opinions expressed in this post do not reflect the position of any of my previous employers or any other company I have been associated with, these comments are mine alone. 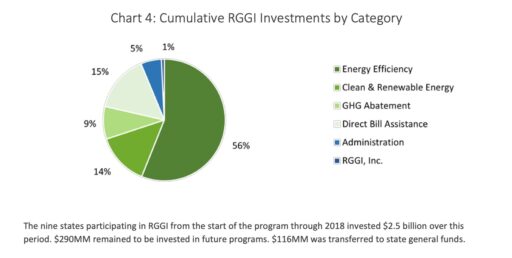 RGGI is a market-based program to reduce greenhouse gas emissions. It is a cooperative effort among the states of Connecticut, Delaware, Maine, Maryland, Massachusetts, New Hampshire, New York, Rhode Island, and Vermont to cap and reduce CO2 emissions from the power sector.  According to a RGGI website: “The RGGI states issue CO2 allowances which are distributed almost entirely through regional auctions, resulting in proceeds for reinvestment in strategic energy and consumer programs.

RGGI notes “The largest share of the investments was directed to energy efficiency, with 38% of the 2018 total. Greenhouse gas abatement programs, which include carbon-reducing beneficial electrification projects, received 20% of 2018 investments. 19% of investments were directed to clean and renewable energy programs, with direct bill assistance receiving 16%.”

Although proponents claim this program has been an unqualified success, I disagree.

I believe the report mischaracterizes some of the numbers relative to the value of the program as an emission reduction approach.  This is because they present “lifetime” benefits of the investments.  Everyone is talking about emissions reductions from some annual value, usually 1990.  In order to determine effectiveness to meet those goals the only benefits that count are annual reductions due to RGGI.  While it may be appropriate to document the lifetime dollar savings for energy efficiency, I am convinced that using lifetime values for any other parameter is bogus.

The first misleading statement claims that “As a whole, the RGGI states have reduced power sector CO2 pollution over 50% since 2005, while the region’s gross domestic product has continued to grow”. The first year of the RGGI program was 2009, when the states of Connecticut, Delaware, Maine, Maryland, Massachusetts, New Hampshire, New York, Rhode Island, and Vermont emitted 108,487,823 tons of CO2.

Their comparison starting date was 2005 when the emissions from those nine states equaled 147,032,069 tons.  The insinuation in the 50% claim is that the RGGI program had something to do with the reduction but the reduction between 2005 and the start of the program was 26% so clearly something else has been going on.  This report was for 2018 and those states emitted 75,177,614 tons of CO2 so my estimate of the reduction since 2005 is 49%.

Data are listed in the State-Level CO2 Emissions for Nine RGGI States 2005 to 2019 table. I used the EPA Clean Air Markets Division Data and Maps query tool to download the emissions from all programs by state for the period 2005 to 2018 so slight differences could be due to the data  used.

The important question is why did the emissions go down.  I believe the real measure of RGGI emissions reductions success is the reduction due to the investments made with the auction proceeds so I compared the annual reductions made by RGGI investments.  The biggest flaw in this report is that it does not provide the annual RGGI investment CO2 reduction values accumulated since the beginning of the program.

In order to make a comparison to the CO2 reduction goals we have to sum the values in the previous reports to provide that information.  The table Accumulated Annual Regional Greenhouse Gas Initiative Benefits Through 2018 lists the annual avoided CO2 emissions generated by the RGGI investments from four previous reports as well as the lifetime values. The accumulated total of the annual reductions from RGGI investments is 3,091,992 tons while the difference between total annual 2005 and 2018 emissions is 71,854,455 tons.

The RGGI investments are only directly responsible for 4% of the total observed annual reductions over the 2005 to 2018 timeframe!  I believe that the average of the three years before the program started is a better baseline and using that metric there was a 52,116,796 annual ton reduction (41%) to 2018 and RGGI investments accounted for only 6%.

One way to determine if the GHG emission reduction costs are an effective tool is to compare the cost per ton reduced against a damage metric.  The social cost of carbon (SCC) is the metric used by Federal agencies for this purpose.  It is the present-day value of projected future net damages from emitting a ton of CO2 today.  I recently posted an overview summary of the SCC as used in New York. but for the purposes of this post you need to know that the values range widely depending on assumptions.  For example, if you use a discount rate of 3% and consider global benefits like the Obama-era Environmental Protection Agency (EPA) did then the 2020 SCC value is $50.

On the other hand, the current Administration interim SCC value is $7 for a 3% discount rate and $2 for a 5% discount rate that represents only benefits to the United States.  The Institute for Policy Integrity report “Expert Consensus on the Economics of Climate Change” projected a higher 2020 SCC value of ~$140 based on a survey of experts.  A 2015 paper in Nature Climate Change “Temperature impacts on economic growth warrant stringent mitigation policy” suggest that the SCC value should be $220.

The Accumulated Annual Regional Greenhouse Gas Initiative Benefits Through 2018 table lists the data needed to calculate the RGGI CO2 reduction cost per ton.  From the start of the program in 2009 through 2018 RGGI has invested $2,775,635,415 and reduced annual CO2 emissions by 3,091,992 tons.  The cost per ton reduced result, $898 per ton reduced, is four times greater than the highest SCC value and two orders of magnitude greater than the current EPA SCC value for United States benefits.

The RGGI report also provides misleading cost per ton reduced information.  Chart 5, RGGI Investments as a Subset of Total Proceeds states that RGGI Investments totaled $2,578,305,737 through 2018 and Table 6: All-Time Benefits of RGGI Investments states that 39,359,169 tons of CO2 were avoided.  Using those two numbers to calculate the cost per ton avoided gives a value of $65.51, which compares much better to the SCC values presented before.  Unfortunately, that approach is wrong.  All the political target reductions are based on emissions from a given year.  Therefore, the cost per ton reduced must only consider annual avoided tons.

The fact is that, for policy purposes, the annual reductions from RGGI have to be considered because that is the “apples to apples” comparison.  It is very disappointing that the RGGI investment reports no longer report the accumulated annual reductions.  I have to believe the reason why is because the values appropriate for determining the effectiveness of this program as a control program reflect so poorly on the program.

There is another change in the reported values between the 2018 report and previous reports that is troubling.  Until this report the first table listed the annual and life-time benefits of that year’s investments for eight categories.  The 2018 report only lists the benefits for two categories: energy bill savings and total CO2 avoided.  I guess showing that the investments in 2017 only managed to train 83 workers was not deemed important enough to include for 2018.

Reductions of CO2 directly attributable to investments made from the auction proceeds only total 4% of the observed CO2 reductions from 2005 to 2018 and only 6% from a representative background before the program started until 2018.  Those poor results combined with $2.6 billion investments costs result in a nearly $900 cost per ton of CO2 reduced.  That value far exceeds the social cost of carbon value contrived to prove the value of CO2 reductions.