Senator Lisa Baker is again seeking equal justice for the only landowners in Pennsylvania not allowed to develop and market their Marcellus Shale gas.

The new bill has a new number, SB 305, but it does the same thing; it advances equal justice on behalf of Pennsylvania landowners in the one neglected part of the state where landowners are not permitted to develop and market their gas because some New Yorkers might not like it. It’s a direct challenge to Governor Tom Trust-Funder Wolf’s double-standards. 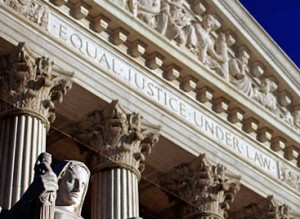 Here’s what Lisa said at the time they introduced the previous bill (SB 1189):

Now, the DRBC, with support from the Wolf administration, is turning that moratorium into a permanent ban. As a matter of policy, this action seems a serious misjudgment. As a matter of fairness, it is even worse, for it slams the door of opportunity on affected landowners by significantly diminishing the value of their property. In my judgment, such deprivation of property rights constitutes a “taking” just the same as if the property were condemned for a transportation project or for any other public use.

As a result, this economic justice proposal declares that a ban implemented by the DRBC will constitute a taking that must be paid for by the DRBC. The legislation will provide that impacted landowners will be entitled to compensation calculated in the same manner as is used to determine value in any other eminent domain action.

Designating certain activity by the Delaware River Basin Commission as the exercise of the power of eminent domain that entitles the owners of the property in question to appropriate and just compensation.

The General Assembly of the Commonwealth of Pennsylvania hereby enacts as follows:

This act shall be known and may be cited as the Delaware River Basin Commission Eminent Domain Activity Act.

The following words and phrases when used in this act shall have the meanings given to them in this section unless the context clearly indicates otherwise:

“Ban.” A prohibition on high-volume hydraulic fracturing within the basin enacted and implemented pursuant to a resolution of the commission dated September 13, 2017. The term includes any other resolution or action of the commission or executive director that has the same or similar effect, regardless of when adopted or taken, to prohibit or substantially limit high volume hydraulic fracturing within the basin.

“Basin.” The area of drainage into the Delaware River and its tributaries, including the Delaware Bay, as defined in the compact.

“Impacted county.” Any of the following:

The General Assembly finds that:

(1) The Marcellus and Utica shale gas formations combined are one of the largest, if not the largest, gas play in North America. These formations run through, among other areas, the northeastern part of Pennsylvania, including the following impacted counties: Carbon, Lackawanna, Luzerne, Monroe, Pike and Wayne.

(2) Rights to mineral estates, and, in particular, to oil and gas estates in the impacted counties, have significant value.

(3) The impacted counties are located, in whole or in part, in the basin.

(4) The commission was established pursuant to the compact between the states of Delaware, New Jersey, New York and the Commonwealth of Pennsylvania and the United States of America.

(5) In general, the purpose of the commission is to:

(i) Encourage and provide for the planning, conservation, utilization, development, management and control of the water resources of the basin.

(ii) Provide for cooperative planning and action by the signatory parties of the compact with respect to water resources.

(iii) Apply the principle of equal and uniform treatment to all water users who are similarly situated and to all users of related facilities, without regard to political boundaries.

(6) On September 13, 2017, the commissioners by a resolution for the minutes directed the executive director to prepare and publish for public comment a revised set of draft regulations to include a prohibition of high-volume hydraulic fracturing within the basin.

(9) Section 14.14(c) of the compact also provides that any taking must be paid for by the commission and not by the signatory parties.

(12) The Commonwealth has not delegated to the commission the ability to determine what activity constitutes a “taking.”

(13) While the General Assembly does not desire by this act to determine whether the commission has the authority to exercise the powers of eminent domain in this instance and does not seek to prevent any lawful and authorized action of the commission to achieve its purposes, the General Assembly seeks to establish that the ban on hydraulic fracturing in the impacted counties contemplated by the commission constitutes a taking of the property of the owners of the oil and gas estates in the impacted counties.

A ban under section 4 shall constitute a taking by the commission of the property of the owners of the oil and gas estates in the impacted counties, and the owners shall be entitled to be paid appropriate and just compensation by the commission, in accordance with law, as a remedy for the taking.

This act shall take effect immediately.

As I said last year Senator Lisa Baker has, once again, “cornered the Wolf Administration“. If the Governor refuses to sign this legislation (likely), he effectively admits to a theft of Pennsylvania rights and a sellout of Wayne Countians and Pennsylvania sovereignty for the sake of New Yorkers and New Jerseyites. It’s as simple as that.

If you agree, send Senator Baker your thank you by emailing her from here. “Thank you for Senate Bill 305” will do. She has struck a blow for equal justice under law, and deserves every single one of our thanks. She also deserves a vote on her legislation this time. Are you listening, Republicans and Democrats who give a damn about equal justice and basic fairness?