Thanksgiving: A Time to Praise Freedom and Thank God for Energy

Thanksgiving is an all-American holiday and a time to praise the freedom that is our heritage along the blessings of our natural resources and energy.

The celebration of a good harvest by 53 Pilgrims and 90 Indians at Plymouth Plantation in 1621 is a story for the ages. Three days of feast was a respite from fear and poverty. Only about half of the original Pilgrims had survived since landing. Their air and water were pristine, the food organic and free-range, the energy renewable. But abject poverty and death were the norms.

Today, Thanksgiving celebrates the compound benefits of progress. But it should also be a warning against the threat of, Venezuela-style, almost unimaginable retrogression.

Capitalist institutions, prominently including incentives from private property, which the early settlers stumbled upon, would institutionalize good harvests for millions of Americans. But another factor literally fueled progress: dense mineral energies to better warm, cook, and light and to run the machines of the Industrial Revolution. 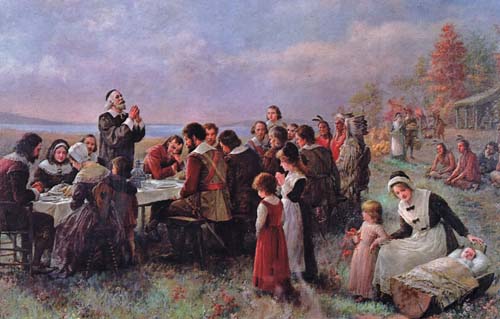 In the 17th century, inanimate energy came from burning plants and woody matter. Water wheels added an energy element to primitive biomass, while human labor and animals did the rest, not unlike the century to come except for the usage of whale oil for lighting.

The richest and most stately man in the world had about the same technology as those at Plymouth for the first Thanksgiving. Louis XIV, the King of France, had more energy at his disposal than any other person in the world. The Palace of Versailles had 2,000 windows for solar, 1,250 chimneys for biomass, and hundreds of horses for transportation. There was not energy storage or portability; food sent from the kitchens to the King’s dining room arrived cold because of the travel time.

This would change in the 19th century. Coal, joined by petroleum and then natural gas, the fossil fuels, did the work previously done by slaves and animals—or work that could not be done at all.

Illuminating oil was a quantum leap. “Kerosene has, in one sense, increased the length of life among the agricultural population,” an observer stated at the time. “Those who, on account of the dearness or inefficiency of whale oil, were accustomed to go to bed soon after sunset and spend almost half their time in sleep, now occupy a portion of the night in reading and other amusements; and this is more particularly true of the winter seasons.”

Erich Zimmermann at mid-20th century filled in the energy history:

When James Watt patented his steam engine in 1776 . . . it marked the beginning of a long series of inventions, including the steam turbine, the gasoline explosion engine, the Diesel engine, the gas combustion turbine, the different jets … the water turbine, and the host of other inventions which have made electricity one of the most widely used forms of energy.

“These inventions so raised the productivity of man,” the resource economist added, “that he, at last, found the leisure and surplus which made possible the systematic pursuit of scientific research.”

Amory Lovins added twenty-five years later: “As medical science, by deferring death, has allowed many more people to live on the earth, so the energy of fossil fuels, by deferring physical scarcity, has kept those people alive.”

Neo-Malthusian John Holdren dare not dispute the utility of plentiful, reliable energy. “Affordable energy in ample quantities is the lifeblood of the industrial societies and a prerequisite for the economic development of the others,” stated the man who would be Obama’s energy and science advisor for eight years.

The work of fossil fuels and electricity can never end. “I am ashamed at the number of things around my house and shops that are done by … human beings,” Thomas Edison stated a century ago. “Hereafter a motor must do all the chores.” Prometheus Unbound still has many chores to do, freeing time for other pursuits.

Most recently, Chelsea Follett has documented how our celebration has become ever more inexpensive. “Thanksgiving dinner is now the most affordable that it has been in more than a decade and is 26 percent lower than in 1986, when the AFBF began its annual survey on the matter,” she wrote.

It seems that, on average, each child born today eventually grows up to make resources less scarce by contributing to innovation and the global economy. And as resources become more abundant, they come down in price, allowing each of us to spend less time working to afford goods like Thanksgiving dinner. As economist Mark Perry put it, thanks to the plummeting time cost, “The average worker would earn enough money before their lunch break on just one day to be able to afford the cost of a traditional Thanksgiving meal.” Now that’s something to be thankful for.