The Fossil Fuel Divestment Shell Game and How It’s Played

Fossil fuel divestment is a cruel joke, perpetrated by the self-righteous Rockfeller lackey and phony, Bill McKibben, who has done the family’s dirty work.

“These numbers are strong indicators that people power is winning,” the Bill McKibben co-founded group boasted [watch video of him below pretending not to know who his Rockefeller funders are and that 350.org hasn’t much money] . “We would not have smashed our divestment targets without the thousands of local groups who have pressured their representatives to pull out of fossil fuels.”

But the mainstream media hardly reported it—for cause. The $11 trillion is the total assets of the funds announcing divestment, not the actual amount of fossil-fuel assets physically sold with a promise not to reinvest.

Previous milestones of $2.6 billion (2015) and $5.2 billion (2016) were exposed as gross exaggerations (even by Mother Jones) with the word “representing” hiding the trick. 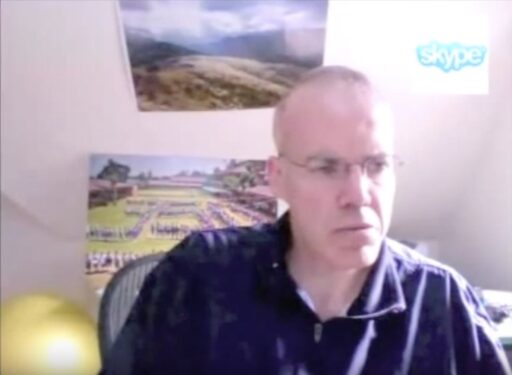 Bill McKibben doing an interview where he not so artfully pretended 350.org didn’t have much money and that couldn’t exactly recall where the money comes from, even though he’s been a Rockefeller lackey for years. Click picture to play it and go here see just how disingenuous this fellow really is; just as the fossil fuel divestment cause itself is.

What is the actual, verifiable, executed amount of oil, gas, and coal investments divested? The divestment reports prepared by Arabella Advisors for 350.org do not provide that figure. But one recent announcement contrasts the two figures. Last month, the University of California’s $13.4 billion endowment announced $150 million in sales in order to become “fossil free.” In this case, “representing” (per 350.org) would overstate divestment by a factor of 90.

And what if such decisions are soft? After all, what is “clean” and “green” and “sustainable” is subjective, not objective. Could a fund divest from a coal stock and then later invest, say, in a midstream natural gas stock? In fact, coal divestment accounts for much of the total.

Assume whatever actual divestment figure you would like—say $500 billion. A humorous rejoinder (calling the Onion or Babylon Bee) would be:

“Sure enough, for every seller there was a buyer,” the joint press release stated: “With fossil fuels representing a market share of 80 percent for the US and 85 percent globally, expect immediate placement of sold oil-, gas-, coal-related stocks for the foreseeable future.”

Two simple facts govern the energy investment market. Demand will meet supply. And that demand is valuing investments based on financial fundamentals and diversification metrics.

“The [stock] market price stays the same; the company loses no money and notices no difference,” stated William MacAskill, the president of the Centre for Effective Altruism. “Divestment, to date, probably has reduced about zero tonnes of emissions,” added Bill Gates. “It’s not like you’ve capital-starved [the] people making steel and gasoline,” he said. “I don’t know the mechanism of action where divestment [keeps] emissions [from] going up every year. I’m just too damn numeric.”

And according to IEA analyst Michael Waldron, “For oil and gas, we see less evidence of divestment actually having a material effect on what the industry is doing. We haven’t seen any huge increase in funding costs for oil and gas companies.”

Private equity firms are quietly financing profitable projects in the natural/mineral industries at a record pace. Non-public companies and state-owned energy sectors, too, are beyond the reach of the divestment movement.

The divestment movement has targeted banks and insurance companies to curtail business with oil, gas, and coal projects (“33 major global banks poured $1.9 trillion to fossil fuel companies since the Paris [Climate] Agreement was adopted,” complained one study.) But China alone is funding a coal boom at home and abroad, while giving lip service to the Paris accord.

In terms of capital structure, [IEA analyst Michael] Waldron notes oil majors are much less dependent on debt to finance spending so “it’s not a case of divestment drying up bank funding which is hurting these companies.” The world’s top 25 listed oil companies by production relied on equity to finance 75% of their spending last year, with 25% coming from bonds and other debts, the IEA estimates.

Fossil-fuel divestment is being joined by a “reinvestment” movement to buy into “industries that will build a just and sustainable future for all.” The pitch by 350.org reads as follows:

Investors should commit at least 5% of their portfolios to climate solutions that help rapidly scale to 100% renewable energy and universal energy access. For those investors who persist in engaging with the fossil fuel industry despite mounting evidence of its failure to achieve anything, we ask them to change track and divest now – as both science and justice demand in this moment.

Science? What about non-alarmist science? Justice? Enter the Green New Deal’s nebulous aims going far beyond the climate crusade. The great majority of investors are not interested in subjective, contradictory, controversial notions of virtue.

Buyer beware applies to socially responsible investing. Remember Enron, considered a “green” and “socially responsible” energy company until its demise in 2001. “Beyond Petroleum” BP was another favorite, pre-Deepwater Horizon. Solyndra and Evergreen Solar are other cautionary tales.

And how about now-bankrupt PG&E, serving northern California? “PG&E shows that we are no longer talking about tree-hugging climate warriors that just want to do good,” stated Wolfgang Kuhn of ShareAction, an activist pension fund. “This is about money.”

Publically traded asset funds are a big target for the anti-fossil-fuel movement. The world’s largest, BlackRock, managing $6.3 trillion globally, is not going along. CEO Larry Fink has wisely kept all his options on the table, drawing ire from divestment advocates.

“BlackRock is perhaps the biggest name you’ve never heard of that is driving the climate crisis,” said Gaurav Madan, a campaigner with Friends of the Earth US. Its sin? Investing in Chevron, ExxonMobil, Royal Dutch Shell, and other integrated majors that offer strong dividends.

Pension groups are fighting back too.

This echoes earlier objections over divestment from leading educational institutions.

Is divestment materially affecting the equity price of oil majors? Of several hundred analyst reports of ExxonMobil, none changed a rating (up or down) based on divestment or climate issues.

Rather than focusing on the voluntary investment market, and companies that consumers freely make profitable, the divestment movement should target government ownership and influence that concentrate wealth and privilege with political elites.

First, state energy companies, many listed above, should be privatized. A partial privatization of Saudi Aramco, announced in 2016, remains in limbo, but even an IPO for a small fraction of the company sets a precedent for more private ownership with this company and others to come.

Second, special subsidies to oil, gas, and coal should be terminated, as should preferences to competing energy technologies. In the US, this amounts to approximately $500 million for fossil fuels, and $7 billion for renewables and nuclear power. Globally, fossil-fuel consumption subsidies of $260 billion (2016) for petroleum (40 percent), natural gas (19 percent), and electricity (41 percent) should also be removed.

The divestment movement must contend with growing demand for oil, gas, and coal from 7.7 billion people—and investor appetite for returns and diversification. Global energy demand rose 2.3 percent last year with fossil fuels providing more than two-thirds of the increase. The outlook is almost 50 percent energy growth by 2050, according to the U.S. Energy Information Administration, with fossil fuels accounting for 70 percent.

It’s still a consumer-first, profit-driven fossil-fuel world. The upstream, midstream, and downstream industries, at home and abroad, offer a wide range of viable investments. Americans and the world should continue to invest, not divest, in dense mineral energies.