The Perfect Response to the Stupendously Stupid Green New Deal

U.S. Senator Bill Cassidy has authored a thoroughly practical alternative to the Green New Deal, which is little more than a New Power Plan for politicians.

Senator Bill Cassidy of Louisiana authored the perfect response to the stupendously stupid Green New Deal. Wonder of wonders, he applies common sense rather than demagoguery to the issues it’s supposed to be about. It’s a beautiful thing; so beautiful our buddy Jim Willis calls it the “Blue Real Deal.” Here it is.

While some countries are struggling to lower greenhouse gas emissions (GHGe), the United States is succeeding in lowering GHGe by substituting coal with natural gas. Now, natural gas has replaced coal as the United States’ main source of energy. Carbon dioxide (CO2) emissions and GHGe in general have decreased dramatically. For the same amount of energy produced, natural gas has half the carbon emissions of coal, without the sulfur oxides (SOx), nitrogen oxides (NOx), and mercury. Natural gas has lower life-cycle emissions than coal, which are even lower when combined-cycle natural gas plants are employed.

Not only has natural gas already drastically decreased emissions in the United States by replacing some coal, it continues to decrease emissions by supporting the deployment of renewable energy. To combat the volatility of renewables, a fast-reacting energy source is required as backup. Natural gas power plants can quickly and safely ramp up and down relative to coal and nuclear power plants. According to the National Bureau of Economic Research, a 1 percent increase in the share of fast-reacting power source is associated with a 0.88 percent long term increase in renewable generation. Investment in natural gas is able and necessary to support increased use of renewables.

The United States has successfully decreased emissions by supplanting coal with natural gas. Natural gas has the added benefit of enabling integration of renewable energy. A successful strategy to decrease emissions while maintaining economic growth is using natural gas as an energy feedstock.

I. Natural Gas is the Cleanest Burning Fossil Fuel

The Paris Climate Accord aspires to limit greenhouse gas emissions and keep global temperatures within 2 degrees Celsius above pre-industrial levels. While many countries are having difficulties achieving their voluntary emission reduction goals through strategies such as cap-and-trade and renewable energy policies, the United States is achieving its goals by decreasing the use of coal and shifting to natural gas-powered electricity generation.

Hydraulic fracking has unlocked enormous quantities of natural gas. At current consumption rates, the United States has enough technically recoverable natural gas to last 90 years. Over the last decade, the price of natural gas has decreased significantly. This has driven a market-based transition from coal powering the electrical grid to natural gas. According to the Energy Information Administration (EIA), in 2017, natural gas generated 31.7 percent of the United States’ electricity, while coal generated 30.1 percent. In 2006, coal accounted for almost 50 percent of total electricity generation, while natural gas accounted for 20 percent. 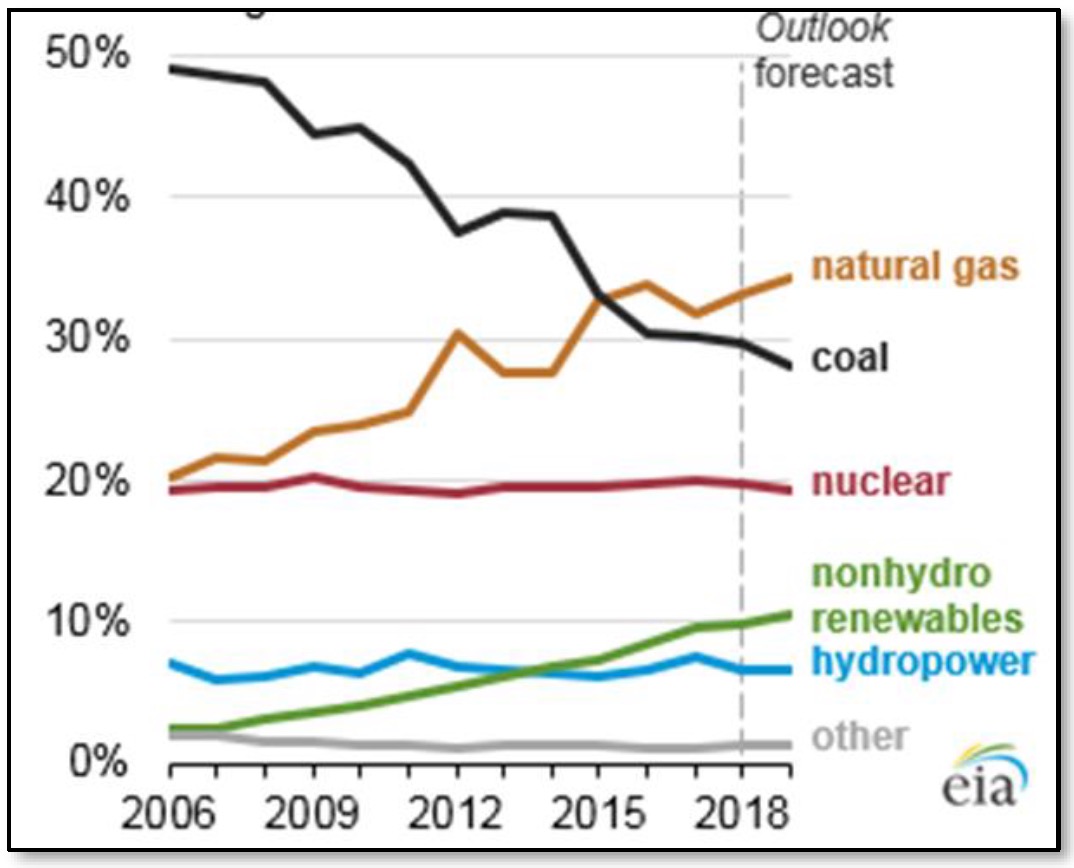 Since 2005, the transition from coal to natural gas has reduced United States CO2 emissions more than 2 billion metric tons. For the same amount of energy produced, natural gas has half the carbon emissions of coal, without the sulfur oxides (SOx), nitrogen oxides (NOx), and mercury.

Figure 2: Electricity Generation Carbon Dioxide Savings from Changes in the Fuel Mix Since 2005

II. There is Still Potential for More Emission Reductions 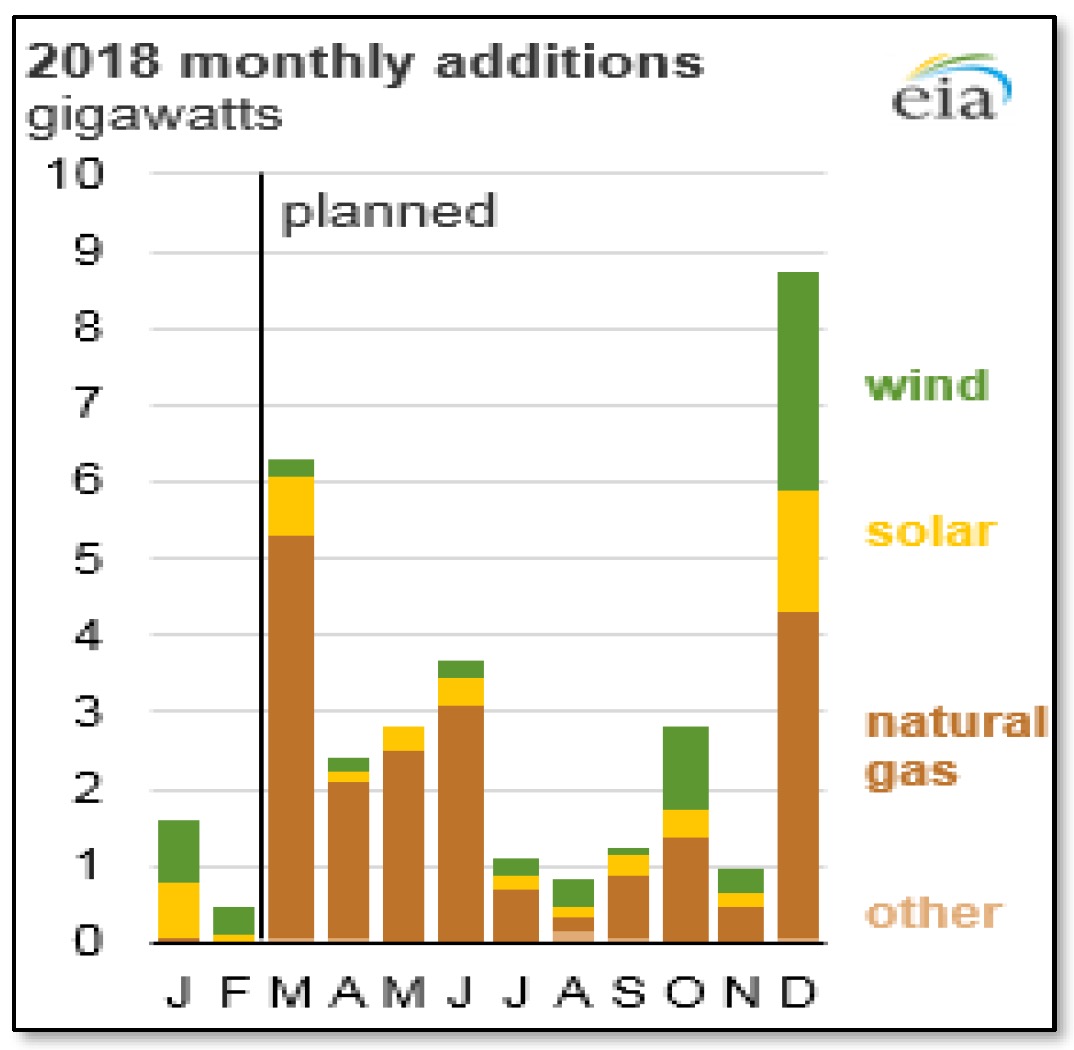 Fast-reacting natural gas electrical generation also indirectly decreases greenhouse gas emissions. The volatility of renewable power—its intermittent nature—limits its usefulness. When the wind is not blowing or the sun is not shining, backup generation capacity is needed to ensure generation needs are met. Natural gas can safely and quickly ramp up and down. This supports deployment of renewables. According to the National Bureau of Economic Research, a 1 percent increase in the share of fast-reacting fossil technologies is associated with a long term increase of 0.88 percent in renewable generation capacity.

According to the International Energy Agency (IEA), life-cycle emissions for natural gas from the well head to the end use are lower than coal, even when considering the leakage of methane. Some dispute this, so some background is in order.

Determining the relative potency of life-cycle emissions for the various greenhouse gases requires a complex analysis of several factors, including their ability to trap heat and how long they remain in the atmosphere. The factors for methane and CO2 are different.

Critics of natural gas claim methane leakage during production and transmission offsets the advantages of natural gas relative to coal in decreasing GHGe, but according to the IEA, methane leakage from well head to end use would have to exceed 3 percent and 5.5 percent for the effects of life-cycle natural gas emissions to be greater than coal over a 20-year and 100-year time frame, respectively. The October 2017 IEA article by Tim Gould and Christophe McGlade from World Energy Outlook delves into this debate.

This debate aside, the IEA estimates the global average methane leakage rate of the natural gas value chain to be 1.7 percent—less than the 3 percent threshold. According to the U.S. Department of Energy, the percentage of methane that escapes into the atmosphere in the U.S. is closer to 1.4 percent. Even higher estimates are still below the 3 percent threshold. The IEA succinctly states that, “on average, [natural] gas generates far fewer greenhouse-gas emissions than coal when generating heat or electricity, regardless of the timeframe considered.”

Low-cost natural gas has already been associated with a manufacturing renaissance in the United States. Notably, Great Britain is now achieving significant GHGe reductions associated with the large scale adoption of natural gas as a power source. These experiences, combined with potential for future emissions savings, should encourage the United States to continue our successful natural gas policies and set an example for other countries to follow.

Based on the U.S. experience so far, a successful strategy to lower global GHGe should embrace the use of natural gas as a substitute for coal until affordable clean coal technology is developed and deployed, and/or renewable energy with adequate utility grade storage capacity matures to the point of having the capability of powering a modern industrial economy. Transitioning from coal to natural gas-intensive energy production lowers emissions, sustains economic growth, and can support the increased viability of renewable technology. By investing in this pro-growth, pro-jobs approach, the United States can continue to be a leader in global GHGe reductions while sustaining its economic success.