Tillerson: Not sure humans can impact climate change

Former Secretary of State and ex-CEO of ExxonMobil Rex Tillerson told an industry conference in Houston he questions whether there is anything humans can do to combat climate change, Bloomberg reported. 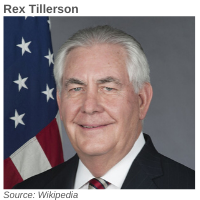 Tillerson said Tuesday he’s long believed climate change “is a very serious matter.” Scientists should be allowed to continue their work on global warming without fear their funding will be cut off if they come to “the wrong conclusion,” Bloomberg reported.

He said the goal of limiting global warming to 2 degrees Celsius (3.6 degrees Fahrenheit) is “fine,” but that modeling the impact of certain mitigation efforts on temperatures is more complicated, Bloomberg reported.

“Whether or not anything we do will ultimately influence it remains to be seen,” he said in response to a question on rising concern about climate change. “One day we’ll know the answer to that, but our ability to predict the answer to that is quite complicated.”