Tom Wolf is an awful governor, not as corrupt as Cuomo, by thunderously stupid. He just promised to veto a pro-labor bill to please fellow trust-funders.

Tom Wolf grew up rich. He’s a trust-funder. He knows little about real life. He’s drawn to trendy causes because that’s what children of wealth typically do to establish their bonafides when it comes to virtue. Your father made the money you now spend by making wooden furniture; so you must hug trees to show you care. That’s how it works. Tom Wolf knows the game and he’s decided it’s in his green legacy interests to side with fellow trust-funders from the likes of the Haas and Heinz families (heirs to chemical and ketchup fortunes) against trade unions who just want more decent jobs.

I’m taking about Tom Wolf promising to veto a set of bills numbered HB 1100, et al, that were recently passed by Pennsylvania’s legislature. It’s the Energize PA legislation we covered here. It would create a package of incentives to attract new manufacturing businesses that can build on the foundation of our natural gas resources. The incentives would be paid for out of tax revenues the new business would generate, allowing Pennsylvania to create thousands and thousands of both blue and white collar jobs. Trade unions, a traditional Democrat party constituency, were solidly behind it. Here’s how the Citizens’ Voice covered it last May:

Kaufer spoke in favor of legislation he proposed called House Bill 1100, and a companion bill to be introduced in the Senate, that he said would mirror the Pennsylvania Resource Manufacturing Tax Credit that attracted the Shell petrochemical cracker plant to Beaver County.

This summer, more than 6,000 trades workers will be on site working to build that plant…

The incentives are available only to manufacturers that construct and bring a facility into service, spent at least $1 billion in capital investments and create at least 1,000 full-time jobs, Kaufer said.

The program is not a tax abatement program. Tax revenue will be generated throughout the life of the program and it can only be collected after the criteria are met, he said…

Yudichak told airport officials to be ready to expand because “more family-sustaining jobs are coming to Northeastern Pennsylvania,” prompting applause from the crowd who attended the press conference…

“Today, we stand united with the building trade unions in the fight to make Northeastern Pennsylvania the eastern hub of the petrochemical manufacturing industry in Pennsylvania,” Yudichak said…

Warren Faust, president of the Northeastern Pennsylvania Building and Construction Trades Council, said the building trades want to partner with everyone involved to ensure that legislation is passed in the House and Senate and gets to Gov. Tom Wolf’s desk for passage.

Eight months have passed, the legislation has passed and now Tom Wolf says he’ll veto it. Why? Because of opposition such as this, back in October, from the non-profit, tax-exempt phony charity known as the Delaware Riverkeeper Network, which is nothing more than a shill for the Haas family (William Penn Foundation), among others:

HB 1102 was scheduled before the House for a floor vote on second consideration on 9.24 (with 2 amendments) after the Commerce Committee approved it late Monday (9.23).

The bill was supposed to be voted on the House floor but wasn’t and was rescheduled for Wed., 9.25. The delayed vote from Tuesday to Wednesday is an important success for our fight against the bill because the House must vote again on third (final) consideration, and because they do not meet again until Oct. 21, HB 1102 cannot be approved this month. THANK YOU FOR MAKING THIS HAPPEN!

…These actions you have taken made a huge impact, and we’ll keep the pressure on!

They didn’t have what they needed to get the bill passed before they went on recess so cannot pass it on to the Senate for consideration yet. We now will have more time to advocate against this pro-fracking bill, part of a raft of horrible pro-fracking legislation called “Energize PA”. We will share information about actions related to HB1102 and the other Energize PA bills so you can participate.

Bear in mind the Delaware Riverkeeper a/k/a Povertykeeper is supposedly limited as to the amount of lobbying it can do and the above is clearly lobbying, which the Riverkeeper vastly and blithey understates. Far more importantly, though, it is the members of the Haas family, through the William Penn Foundation, Tom Wolf’s fellow trust-funders, who pay for this and he has chosen them over the members of the Northeastern Pennsylvania Building and Construction Trades Council and trades across the Commonwealth. He chose to side with Leonard Haas over these folks: 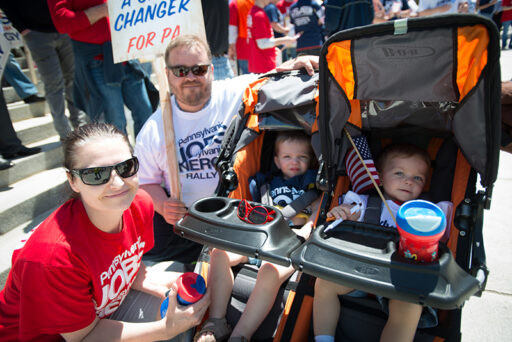 But, here’s the thing; the William Penn Foundation is a private foundation that’s not legally permitted to do any lobbying whatsoever. The Delaware PovertyKeeper is its agent, as the Haas family passes money through it, to do the dirty work of lobbying Tom Wolf to reward his trust-funder friends. But, Tom Wolf has chosen poorly. Trade unions are noticing who he sides with on important legislation. That’s why State Senator John Yudichak is no longer a Democrat. Tom Wolf chased him out of the party with stupid—yes, thunderously stupid—stunts such as this one. But, Tom Wolf doesn’t care. He’s running for Vice-President now and he needs his green street cred with those trust-funder friends.