With the holidays soon upon us, the Trehab Community Action Agency of Susquehanna County has already begun distribution of donated food to area residents. In the course of their 35th annual Feed-a-Friend Thanksgiving Food Drive, Trehab got help from numerous individuals, organization and businesses like Cabot Oil & Gas Corporation. Cabot employees recently helped to carry thousands of pounds of donated food into the Trehab Food Pantry where it was later sorted and packaged for redistribution. 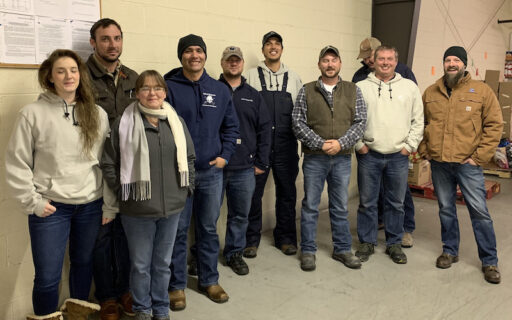 According to Trehab administrator Edlyn Flannery, each preregistered household receives a frozen turkey and all the traditional Thanksgiving fixings, including dessert. More than 4,000 households and nearly 11,000 individuals were provided with food assistance by Trehab in Susquehanna and Wyoming counties last year, more than 750 households during Thanksgiving alone. Recipients include families with limited incomes, elderly residents and those who are homebound.

Many local schools, churches, businesses and clubs serve as drop-off points during the course of the collection. Members of the Montrose Kiwanis Club rounded up the food items and transported them to Trehab’s two food banks, located in Montrose and Susquehanna Depot. Cabot’s volunteers met the food delivery trucks at the Montrose location and moved the food inside.

“Cabot workers volunteered their time to assist with the unloading of the heavy boxes of food from the incoming Kiwanis volunteers’ fully-loaded trucks,” Flannery explained. Students from most of the county’s high schools arrived afterwards to sort and bag food and also to assist on “giveaway days.”

Cabot was not the only energy company to lend a hand this year. DTE Energy employees assisted at Susquehanna Depot by packing large cloth bags purchased by the company.

Cabot external affairs/land specialist Bonnie Morris, who coordinates employee participation for Feed-a-Friend and an upcoming toy drive with Interfaith, said that it appeared to her that there was even more food at the Montrose location than last year. “Everybody was eager to help. They all had a good time,” she stated. “’Tis the season to give back. I really like doing it.”

Trehab works with the Area Agency on Aging, Step by Step and other organizations to ensure that as many people as possible get a Thanksgiving meal.

While Cabot has been involved with Trehab’s Feed-a-Friend program for eight years, it was the first year that Cabot district superintendent B.J. Cline has taken part. He described moving the collected food as “a rewarding experience that allows you the opportunity to become a positive influence by helping others.” From a company standpoint, he added, “it allows Cabot the opportunity to get involved, show how much the community means to us and help others in difficult situations.”

This year, Cabot has also increased monetary contributions to the Feed-a-Friend program from $1,500 in previous years to $5,000. “Monetary donations collected during the Feed-a-Friend Thanksgiving Food Drive time frame help us defray the cost of the turkeys that cost over $17,000,” Flannery explained. “Cabot’s large donation will enable Trehab to stabilize this community effort to serve those who are in need of food for this year and years to come.”

“Trehab truly makes a difference in our community. They do a tremendous job supporting those in need during the Thanksgiving season,” Cabot external affairs director George Stark stated. “Whether it be a monetary donation or our employees volunteering, Cabot is proud to partner with Trehab this Thanksgiving season to enhance their efforts.”