Truckers Making It Happen in Gas Fields of Northeast Pennsylvania

Truckers are key to the energy industry and so much else. They are the critical path for delivering food and supplying the gas industry.

As the state and much of the country deal with a new round of restrictions, the trucking industry must keep moving. We need truckers to continue to supply our food and other necessities. While some businesses face an uncertain future with no clear end to the health crisis in sight, companies that move freight and directly support other industries have proven resilient. 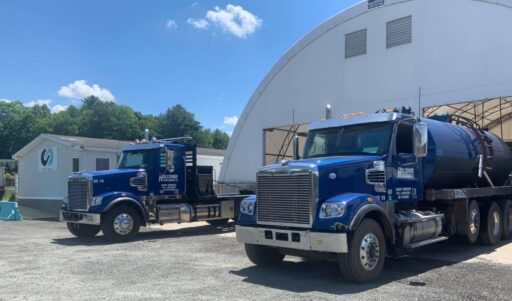 Holcombe Energy Resources in Wyoming County is a growing oil and gas service company operating in the Marcellus and Utica shales. Eastern Freight Systems is a division of Holcombe, offering two spotter programs: flat and freight distribution, and industrial facility logistics. Matthew Austin is President and CEO of both.

On any given day, Holcombe and Eastern have 45 drivers on the road. Both have been able to stay busy and have added employees throughout the year. But the pandemic brought about changes in protocol, and each day requires its own measured response. When the first round of COVID guidelines came out in the spring, the trucker demand increased.

“For several months, we had a very hard time hiring people,” Austin related, attributing the shortage of drivers to stimulus checks and weekly bonuses for those collecting unemployment compensation.

Luckily, Holcombe invested heavily in the CDL training school at the Susquehanna County Career & Technology Center. “That has been a big help to us,” said Austin. “We’ve been able to hire a lot of people out of that school.”

Eastern also had to be flexible to keep trailers loaded and drivers on the road. “We had to go through a lot of effort to find different work loads,” Austin recalls. “Everybody needed toilet paper, but other areas were way down.” Eastern contracts with the state to deliver to wine and spirits stores, but they were closed. “That was an entire division that was shut down.”

Among other random loads, Eastern’s truckers were moving a lot of paper product for both Cascades Tissue Group and Procter & Gamble. The impact on the Holcombe side was not as dramatic. “Everyone at home still needed to heat their houses and drive their vehicles, so the oil and gas business helped us weather the storm,” Austin explained. “It just changed the way that we interacted with customers and the general public.”

In addition to more electronic inventory and invoicing, workers adopted safe-distancing practices and donned their face masks. Any employee suspected of exposure to the virus self-quarantined, and the company has had no positive cases. “Our team has done a great job of following the guidelines while keeping their personal views separate,” Austin remarked.

But the landscape continues to change. Eastern once hauled a lot of steel for Toyota, but auto manufacturing is down and the orders have stopped. “I have a lot of concerns about the economy coming out of this,” said Austin.

The upside, he noted, is that government financial assistance was a big help in getting Eastern through the roughest months. “It created more opportunity. Our staffing has increased by 15 percent,” Austin offered. “At the end of the day, we’ve been able to shift resources from things that are shut down by the state to other things that are needed.”