[Editor’s Note: The University of Pittsburgh is being given $2.5million by Tom Wolf to study but one possible cause of childhood cancer. That’s junk science.]

Sound silly? Sound stupid? Substitute “shale drilling” for “peanut butter” and you can see how absurd it is for Pennsylvania to announce awarding $2.5 million to Pitt to study a single potential cause for rare childhood cancers in southwestern PA. 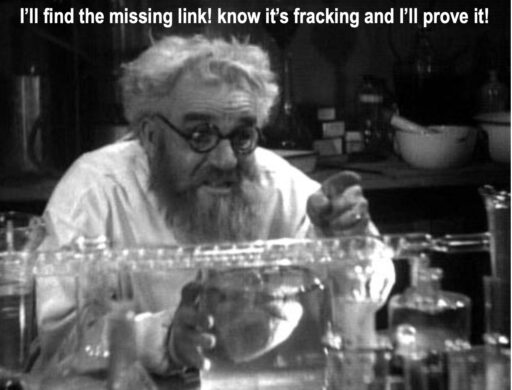 Last week, the Gov. Wolf administration announced a $2.5 million contract has been awarded to the University of Pittsburgh Graduate School of Public Health to “conduct research on the potential health effects of hydraulic fracturing in Pennsylvania.” Folks, that’s not real science. Real science looks at ALL potential links, not just one.

You can bet your bottom dollar Pitt researchers will find some sort of bizarre connection between fracking and cancer in kids, even though the rate of those rare childhood cancers is statistically no higher in southwestern PA than anywhere else in the country. Researchers will have to justify taking the money. Can you imagine a year or two from now when Pitt files the results of research if the report finds *no* link between fracking and childhood cancer? Pitt would never get another research grant again.

Pitt (and frankly Tom Wolf’s Health Department) are not interested in real science or real research. They want a political science outcome. Otherwise there would not be strings attached on the money limiting the study to ONLY shale fracking and its potential link to cancer. Again, this is not real science. From the Department of Health:

The Wolf Administration today announced that a $2.5 million contract is in place with the University of Pittsburgh Graduate School of Public Health tUnio conduct research on the potential health effects of hydraulic fracturing in Pennsylvania.

“We are pleased to announce that we have chosen a partner to assist us in researching the health effects of hydraulic fracturing in Pennsylvania,” Governor Tom Wolf said. “My administration is committed to ensuring that Pennsylvania is a healthy, vibrant place for all who call it home. We look forward to the invaluable research that will be done by the University of Pittsburgh and the information it will provide for the commonwealth.”

In March of 2020, the Department of Health published a four-county report on the number of Ewing’s Family of Tumors, cases of childhood cancer and total cancer cases in Fayette, Greene, Washington and Westmoreland counties.

“We have heard the concerns from families and community members impacted by cancer and other health issues in the southwestern part of the state, and we are dedicated to taking the proper steps to keep our residents healthy,” Secretary of Health Dr. Rachel Levine said. “We are committed to a healthy Pennsylvania for all and efforts that prevent injury and disease in the state. This essential research project is a testament to that.”

One study will be led by Dr. Evelyn Talbott, Dr.P.H., M.P.H., Professor of Epidemiology at Pitt Public Health and director of the Environmental Epidemiology section. She has over 35 years of experience conducting cancer and other health effects studies in southwestern Pennsylvania and abroad. Dr. Talbott will investigate the relationship between hydraulic fracturing and the development of childhood cancers in southwestern Pennsylvania.

“I grew up in Washington County, and one of my first epidemiology investigations at Pitt involved a health study of thyroid cancer among those living near a uranium mill tailings site,” Dr. Talbott said. “So this investigation holds both personal and professional significance to me. I am committed to community inclusion and openness as we go forward in our endeavor to learn the facts.”

The other study, led by the director of Pitt Public Health’s Center for Occupational Biostatistics and Epidemiology and Research Associate Professor of Biostatistics, Dr. Jeanine Buchanich, Ph.D., M.Ed., M.P.H., will aim to replicate earlier studies on acute conditions, such as asthma and birth outcomes, using data from southwestern Pennsylvania.

“As a lifelong resident of southwestern Pennsylvania with much of my research focusing on environmental health in the area, I am personally and professionally committed to a systematic investigation of the health effects of hydraulic fracturing,” said Dr. Buchanich.

The goal is for both studies to be completed within the next two years.

As part of the contract, Pitt Public Health will be producing public-facing summaries on a quarterly basis to keep the public updated about the research. They also will work to provide a study progress update at the end of the first year. At the conclusion of the project, a public meeting will provide information on the final outcomes of the research.*

To ignore an old uranium dump in the same area and concentrate only on fracking as a potential cause is research malpractice and a complete waste of taxpayer money on these studies. Incidentally, the people doing the research are the same people who, three months ago, praised Gov. Wolf’s arbitrary and capricious lockdown of the state, destroying jobs, using the coronavirus as an excuse (see Wolf’s Coronavirus Measures Saved Thousands Of Lives: Researchers). Is the $2.5 million grant a reward for their earlier support of Wolf? One wonders.

The Pitt “researchers” are leftist Democrats, profoundly biased and uninterested in finding the real reason for the cancer clusters. They will use the Pitt name to try and attack the shale industry. Shame on Wolf. Shame on Pitt. Shame on anyone who believes the lies that will be spun from a “study” with a predetermined agenda and predetermined outcome.

The people who really suffer are the families of these precious children with dread cancers. They want answers. Unfortunately, they won’t get those answers from this waste of $2.5 million.

Editor’s Note: Jim couldn’t be more justified in his expectations from this study. Dr. Evelyn Talbott has done it before, in fact. She was the senior author of previous research speculating fracking caused low birth weights in children; nonsense funded by the fractivist enabling Heinz Endowments, no less. She was also involved in another Heinz funded study that found a supposed link between children with autism spectrum and exposure to “higher levels of certain air toxics during their mothers’ pregnancies.” Neither study, of course, provided any actual causal data. Both were simply correlations, which is what will undoubtedly happen in this instance so as to allow speculation and justify further study that may or may not ever happen.