At Feb. 6, the Henry Hub spot price had fallen to $1.86/MmBtu, and EIA expects prices will remain below $2.00/MmBtu in February and March, Kallanish Energy reports.

EIA forecasts prices will rise in the second quarter of 2020, as U.S. natural gas production declines and natural gas use for power generation increases the demand for gas. 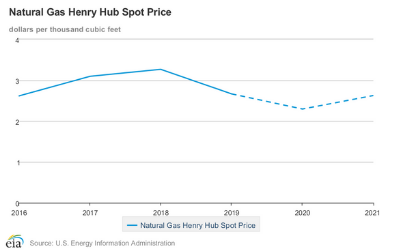 In the February STEO, inventories rise by a total of 2.1 Tcf during the April through October injection season to reach almost 4.1 Tcf on Oct. 31, which would be the highest end-of-October inventory level on record.