Vaccines to Fight COVID-19 Impossible Without Oil and Gas

[Editor’s Note: The vaccines going out across the world to fight COVID-19 would not be possible without oil and gas, as the folks at IER thoroughly explain. The full pdf from IER is available here.]

Few Americans realize that oil and natural gas are used to make plastics, glass and other materials needed in developing a vaccine. In fact, in today’s world it would be impossible to produce the medical results Americans expect without oil and natural gas. From outfitting a laboratory to supplying electricity to run the equipment to transporting the vaccines to hospitals, clinics, pharmacies and doctors’ offices, the oil and gas industry supported and is continuing to support front-line operations in the search for an effective immunization and its distribution to the public.

What normally takes years to accomplish was accomplished in a matter of months as the necessary tools and materials were already available to researchers to develop vaccines to control the coronavirus outbreak. 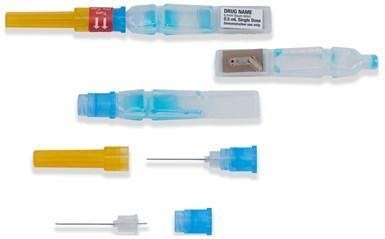 Over 165 vaccines against the coronavirus are currently being developed around the globe, including 27 already in human trials, according to the New York Times Coronavirus Vaccine Tracker[1]. As they move through the testing phases and become approved, governments are pre-ordering the vaccines and are contracting out the requisite syringes and vials. By some estimates, 850 million syringes[2] could be needed in the United States, assuming two doses for each person as many of the vaccines require a secondary booster after the first shot. One firm was contracted to create plastic prefilled syringes where the needle automatically retracts directly from the patient into the barrel of the syringe when the plunger handle is fully depressed[3].

Hydrocarbons Used to Make Plastics in Medical Equipment and Supplies

Plastics, also called polymers are derived[4] from natural, organic materials such as cellulose, coal, natural gas, salt and crude oil. The production of plastics begins with the distillation of crude oil in an oil refinery, separating the heavy crude oil into groups of lighter components, called fractions. Each fraction is a mixture of hydrocarbon chains (chemical compounds made up of carbon and hydrogen), which differ in terms of the size and structure of their molecules. One of these fractions, naphtha, is the crucial compound for the production of plastics.

Plastics have been recognized for their critical role to the production and distribution of life-saving products:

Plastic materials have made modern healthcare possible. From the casing of an open MRI machine to the smallest tubing, plastics have made health care simpler and less painful.  Disposable syringes, intravenous blood bags and heart valves are made of plastic. Plastics can be molded or formed into endless shapes and products. Tubing, syringes, IV bags, catheters, labware, films for packaging, surgical instruments, housings and connectors are just a few examples of the wide array of plastics-based medical devices. Plastic packaging[5], which is light weight, low cost, durable, and transparent, is ideal for medical applications.  Today’s most innovative medical procedures are dependent on plastics[6], which can be mass-produced at low cost and are thereby economical. 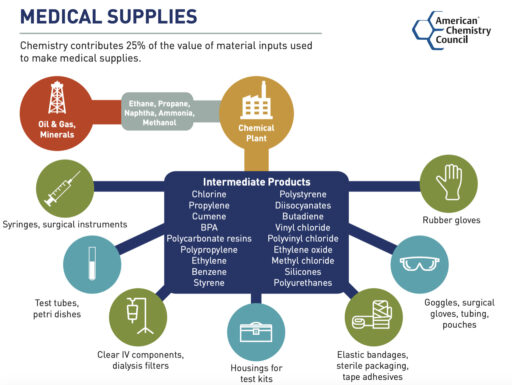 Plastics help keep medical environments and treatments sanitary, safe and effective. With the introduction of single-use, plastic-based devices at a large scale in the 1960s, the dangerous cross-contamination between patients was dramatically reduced and hospitals were made safer for workers. Later, the turn to plastics was due to an increase in infectious diseases, aging populations leading to a rise in geriatric care and a shift towards shorter hospital stays and more home health care.

Major plastics used in medical supplies and equipment include:

Hydrocarbons Are Used in Making Glass for Medical Uses

Glass is made from liquid sand[10], and its manufacture is highly energy-intensive. The bulk of energy consumed in glass manufacturing comes from natural gas combustion[11] used to heat furnaces to melt raw materials to form glass. While most furnaces are natural gas-fired, there are a small number of electrically-powered furnaces and many glass furnaces use electric boosting (supplementary electric heating systems) to increase throughput and quality. Over 60 percent of the electricity in the United States is generated from hydrocarbons, primarily natural gas and coal. After the melting and refining process is complete, glass is formed and finished to create the final product. The manufacturing processes depend on the final glass product, and can include slow cooling, tempering, coating and polishing, all of which require additional energy.

Medical applications of glass include[12]:

The coronavirus vaccines being developed are required to be refrigerated at various temperatures depending on the vaccine. Pfizer’s vaccine, for example, needs to be kept extremely cold: minus 70 degrees[14] Celsius, while Moderna’s vaccine needs to be kept at minus 20[15] Celsius, similar to a regular freezer. That requires that the vaccines are transported and stored in refrigerators.

A typical refrigerator is likely made out of several different types of plastic[16]. These include ABS, or acrylonitrile butadiene styrene, polypropylene, high impact polystyrene, polycarbonate and foamed polyurethane. Each plastic has its own strength, flexibility and insulation properties. For example, manufacturers use polycarbonate, which is strong and rigid, to form molded exterior doors, handles and body panels. ABS, polypropylene and polystyrene are used to form the fridge’s interior, including the interior door and wall panels as well as the shelves and drawers. Polyurethane is primarily found in refrigerator insulation, forming thin strips that trap air between layers of harder plastics.

Hydrocarbons Needed for Transporting the Vaccine

Once the vaccines are produced, they need to be distributed to hospitals, clinics, pharmacies and doctors’ offices. Whether they are shipped by plane, truck or other vehicle, petroleum products will be used to distribute the vaccines across America.

Hydrocarbon gas liquids (HGLs)[22], the third most-used category of petroleum in the United States, include propane, ethane, butane, and other HGLs that are produced at natural gas processing plants and oil refineries and are used for refrigeration as described above. Total consumption of HGLs in 2019 averaged about 3.14 million barrels per day.

Jet fuel is the fourth most-used petroleum product in the United States. Jet fuel consumption averaged about 1.74 million barrels per day (73 million gallons per day) in 2019.

Ninety-five percent of the U.S. transportation system is fueled by oil and natural gas.

Once the vaccine arrives at facilities that immunize patients, hydrocarbons are again abundant in the wide variety of plastics visible. In fact, they are even being used in the construction of medical buildings. Plastics, particularly polyvinyl chloride (PVC), are increasingly used in hospitals[23] and other medical offices for purposes other than medical supplies and equipment that are noted above. Due to its technical properties, PVC makes for hygienic and chemically resistant wall covering and shock-absorbent, durable and safe flooring that is noise reductive and comfortable to walk on. It also allows for integration of signage of various kinds for easy navigation. And in combination with stretch ceilings made out of PVC, PVC flooring can improve acoustics.

The coronavirus vaccines would have been impossible to produce, transport, store and administer without the use of oil and gas. Hydrocarbons are the basis of the plastics used in medical facilities, supplies and equipment, of the refrigerants needed to keep the vaccines active and of the fuels needed to transport vaccines, personnel and equipment. It is crucial that Americans recognize the immense and varied benefits that the oil and gas industry confers – and has conferred specifically during the coronavirus pandemic. Calls from certain environmentalists and politicians to eliminate oil and gas, if heeded, would make the vaccine mobilization impossible.

The full pdf from IER is available here. Check it out for more illustrations and for an easy to distribute version of this post!

[3] In its first-quarter earnings report, the company noted that in 2019 Chinese manufacturers had produced approximately 82.6 percent of its products. That supply was interrupted when COVID struck China, but the company will have sufficient inventory to fulfill demand despite the temporary disruption in products from China. Plastics Technology, The Race for a Coronavirus Vaccine Spurs Syringe, Vial Production, July 22, 2020

[4] Plastics Europe, How Plastics are Made

[6] Craftech Industries, The Many Uses of Plastic Materials in Medicine