Something fascinating is happening in Vermont. It involves a combination of CNG with RNG or renewable natural gas. It creates a virtual pipeline that can deliver both and dramatically reduce emissions across the board. Here are the details via a news release from Vermont Gas (VGS) and NG Advantage (NGA): 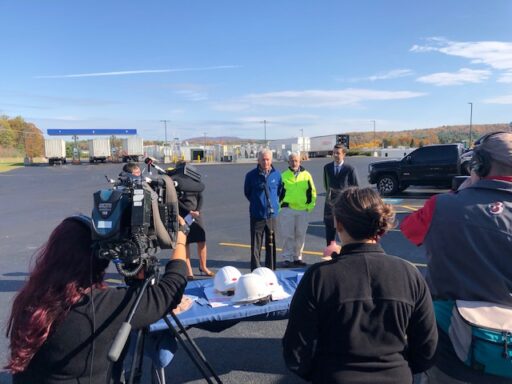 This unique partnership allows NGA’s twenty-six current customers and new customers across New England and New York to take advantage of RNG, a benefit that until now has only been available to pipeline-connected users.

Before NGA began service in 2013, these customers used No. 2 and No. 6 oil and some even used “bunker fuel” for their process and/or space-heating energy needs. By switching to compressed natural gas, they immediately lowered their carbon footprint by 26%. Renewable natural gas enables customers to reduce greenhouse gas emissions (GHG) even further.

“VGS is proud to work with NGA to offer an environmental solution found nowhere else in the country,” said Don Rendall, President and CEO of VGS. “This product is the marriage of VGS’ first-in-the-nation renewable natural gas service with NGA’s industry leading virtual pipeline. Using both companies’ existing infrastructure allows us to connect renewable gas supply with customers who want to fight climate change. It’s is an innovative model for the industry and a game-changer for large users who do not have the benefit of being connected to the VGS system.”

Renewable natural gas is made by capturing naturally occurring methane emitted from decomposing waste materials at dairies, landfills, and wastewater treatment plants. This methane is a powerful greenhouse gas if released to the environment. In August 2019, VGS joined its partners at Vanguard Renewables, Middlebury College, and the Goodrich Family Farm in Addison County, Vermont to break ground on the first local digester project that will turn farm and food waste into pipeline quality renewable natural gas.

“The net effect of using RNG instead of oil can reduce greenhouse gasses below the level which would have occurred even if the industrial customers turned off their furnaces entirely since it replaces the current practice of releasing methane from food and waste into the environment. ” said Tom Evslin, NG Advantage founder and chairman “Capturing methane from agricultural sources reduces the environmental impact of Vermont farms and creates another possible income stream for farmers.”

Last year, NGA’s customers avoided the emission of 163,770,944 pounds of CO2 – the equivalent of taking 15,772 cars off the road and roughly the same CO2 savings estimated from all of the commercial wind turbines in Vermont. Customers financed their conversion from oil with the substantial fuel savings provided by natural gas. Some NGA customers reported they would not have been able to stay in business without these savings.

Secretary of the Agency Commerce and Community Development Lindsay Kurrle lauded today’s announcement for its economic and environmental impact to our state and region. “Congratulations VGS and NGA on your continued commitment to our environment and economy. This is yet another example of why Vermont is such a great place to live and raise a family. This new initiative is exactly the type of creative collaboration that grows and protects jobs in our state, while at the same time reducing carbon emissions.”

NGA will take delivery of RNG from VGS at the NGA compressor station in Milton, VT and deliver it to customers in the same trucks now being used for compressed natural gas (CNG). No new infrastructure or upgrades are required at either NGA, VGS, or customer sites. NG Advantage is VGS’s largest customer.

In 2018, VGS became the first local distribution company to offer customers a renewable natural gas adder program. There is a premium for this product so industrial customers are likely to phase-in their use of RNG over time as they seek to reduce emissions and operate with a lighter environmental impact.

“Our customers are among the most important and largest employers in their area, so ensuring they can be competitive with energy costs is essential,” said Rico Biasetti, CEO of NG Advantage. “VGS is a great partner in that work. Our customers are proud of the emissions reductions they’ve already made and have asked us for help in going even further. RNG availability is our response to this demand.”

NGA’s majority owner, Clean Energy Fuels Corp., is the leading supplier of both CNG and RNG for vehicle fueling in the United States. Clean Energy’s Redeem™ was the first commercially available RNG vehicle fuel in the US and is now available in all 50 states.

Andrew Littlefair, President and CEO of Clean Energy, said: “Congratulations to VGS and NGA for taking this important step together. Providing the environmental benefits of renewable natural gas to industrial and commercial customers not served by pipeline is ground-breaking and a natural extension of Clean Energy’s goal to provide the benefits of RNG to all of our 525 stations around the country. Waste-to-energy will play a critical role in meeting climate goals for future generations.”

Editor’s Note: This is a callout to those truly concerned about global warming and wanting to do something about air quality. If they’re serious they’ll support this project, which is a demonstration of how both can be addressed.