Veterans Return to Patriots Cove to ‘Fish For the Fallen’

Fallen veterans and first responders were just honored at a Patriots Cove fishing competition held to help support caregivers to these special people.

Thunderstorms threatened but never really materialized as seven teams of three anglers each cast their lines into Beaver Run near Noxen in Wyoming County on May 29 to kick-off the second annual Fish For the Fallen tournament. The men and women were paired with skilled trout fishing guides and mentors and tried their luck along seven designated stretches of the stream into the afternoon.

Chad Johnson of Williams Companies helps Air Force veteran Brad Lutz of Nescopeck pull a trout out of Beaver Run, as Brad’s father Keith looks on. Their team was sponsored by Meshoppen Stone, one of six corporate sponsors for the annual event, and took third place in the friendly competition.

This is actually the third year for the event, but it was enhanced with corporate sponsorships and the competitive element last year. A team sponsored by Cabot Oil & Gas Corporation took top honors at the end of the day, followed by Gas Field Specialists (GFS) and Meshoppen Stone, but participants maintain that the experience is much more than a competition.

“They’ve put a lot of effort into getting disabled vets out here and give them something else to think about,” Richard Sands, a retired Navy Seabee from Kingsley said of the founders of Patriots Cove.

The original 18 acres of forest and creek was purchased in 2017 by Jeff and Melissa Swire to be developed into a peaceful venue for veterans and first responders with physical and emotional scars to bond with nature and each other. Sands was fishing with Army veteran Dale Gow of Nicholson and Ken Bach, who also serves as a guide and mentor for Hunts for Healing. Their team was sponsored by Williams Companies of Tunkhannock.

Each team fished in honor of a fallen first responder or member of the military. Photos and bios for the seven men and women were displayed in one of the common areas. Anglers wore a photo badge that also contained some facts about their designee. The team sponsored by GFS, for example, fished in honor of Spc. Chad Edmundson of Williamsburg, VA. 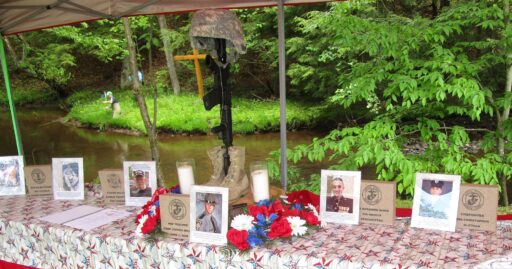 A display of fallen military personnel and firefighters gave each participant in the Fish for the Fallen tournament a real life hero to learn about together, opening the door to personal conversations throughout the day and into the evening.

Edmundson enjoyed fishing so much as a youth that he would take his pole on the school bus in the morning and fish his way home. He was killed by an IED in Iraq in 2009. Edmundson’s story hit a little too close to home for team member Gene Thomas, a disabled Marine Corps veteran. But part of the mission of Patriots Cove is to allow veterans to process feelings associated with PTSD in a serene setting among their comrades.

“I can let go here. I can’t do that at home,” Army veteran Nico Gil of Bushkill related. “Jeff has never asked anything of us but to have a good time and be yourself.” Gil had brought his wife along on previous visits, but the COVID-19 situation restricted the number of people who could gather at Patriots Cove this year.

Gil explained that learning fishing skills that he could share with his children while Melissa Squire engaged in conversations with the veterans’ partners and spouses produces multiple benefits. “You have something to take home with you,” Gil related. “If you don’t include your family, you are still on your own.”

In addition to Gil and guide John Pettinger, the Cabot team was rounded out by Mike Yauneridge, an Army veteran from Johnstown. Yauneridge was the defending champion from the previous year’s tournament and has also become a volunteer at Patriots Cove. They fished in honor of firefighter and Marine Corps veteran Christopher Slutman who died in Afghanistan.

Yauneridge jokes that the Swires won’t let him go home, but he is clearly fond of his “second family” and the climate of understanding they provide. “Some days when I’m not feeling it, Jeff will give me a job to do,” he noted.

“It’s not a one-and-done event,” Gil concurred. “Jeff gives you a sense of purpose.” 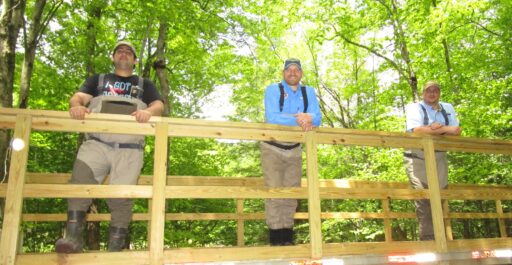 John Pettinger, a project manager for Williams Companies and a mainstay at Patriots Cove, served as the mentor and guide for the Cabot-sponsored team that also included veterans Nico Gil (left) and Mike Yaueridge (right). The men took first place in the second annual Fish for the Fallen tournament at Patriots Cove on May 29.

“We’re used to keeping the things we carry to ourselves,” said Keith Lutz, a Marine Corps veteran from Nescopek who was fishing with son, Brad, and mentor Chad Johnson on the Meshoppen Stone team. “It’s nice to find a place like this where we can put it all down for a day.” It was Keith’s first time at Patriots Cove and the first time he’d reeled in a trout with a fly rod – a high-scoring 20-incher.

Additional sponsors this year included Whipperhill Compliance of Potter County and Quality Collision from Luzerne County. Companies that get involved often do so in honor of the veterans who work for them or because their employees have become volunteers at Patriots Cove and encourage their support for the venue.

Just as many of these businesses partner with each other as contractors, Patriots Cove has become a bit of a melting pot for the mentors, guides and anglers. Pettinger and Johnson are employees of Williams Companies but led the Cabot and Meshoppen Stone teams, respectively. Army veteran Troy Murphy not only fished for GFS; he used to work for them.

The Swires recently purchased an additional 11 acres adjacent to Patriots Cove and have expanded the handicap-accessible pathways another quarter mile up stream. Volunteers are constantly improving the quality of the stream with the methodical installation of stone and log features that provide more aeration. (Beaver Run was once considered all but dead.) The construction of a new caregiver building should be completed in August.

Bill desRosiers, Cabot’s director of external affairs, is a regular visitor to the site and his enthusiasm about the efforts of staff and volunteers there continues to grow. “Each time I visit Patriots Cove, I am elated by the progress this organization is making in cleaning up and enhancing this beautiful trout stream,” he stated. “Through these efforts, veterans – especially those who have been injured in the line of duty – have access to the stream in ways that might not be available to them elsewhere.”

The corporate sponsorships will be used to fund future activities and programs, all of which are contingent on the current COVID-19 situation. Luckily, the vastness of Patriots Cove lends itself to safe-distancing practices. Masks are worn inside shared spaces, and handwash and sanitizer stations are set up at the entrances of each building.

Congressman Fred Keller also stopped by on May 29 and was impressed by the camaraderie that Patriots Cove provides for program participants, calling it a “tremendous asset and support for the veterans’ community.” Keller was humbled by the opportunity to show his appreciation “for the folks at Patriots Cove and the veterans who have sacrificed so much for our country and the freedoms that we hold dear.” 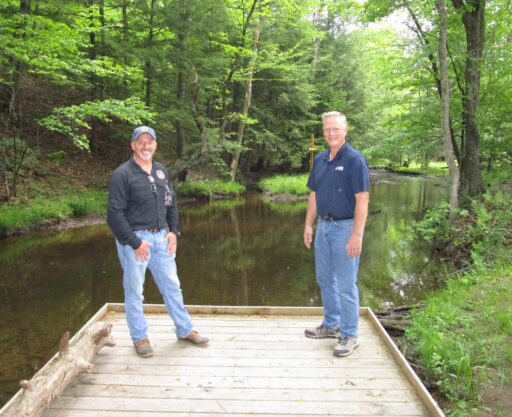 Congressman Fred Keller (right) was among the visitors to Patriots Cove on May 29 to meet Fish For the Fallen participants and get a tour of the facility, which includes wheelchair-accessible docks, from co-founder Jeff Swire (left).