The Pennsylvania Farm Show is a great place to see draft horses at work and Williams Companies, the pipeline folks, sponsored a draft horse hitch and ride.

One of the more peculiar contests at the Pennsylvania Farm Show is the annual Celebrity Feed Scurry, a segment of the Draft Horse Hitch and Drive, which was sponsored again this year by Williams Companies and attended by Williams director of community and project outreach Mike Atchie. The contest, which featured numerous elected officials, local television personalities, and even a Fair Queen, was conducted by the Friends of the Pennsylvania Farm Show Foundation. 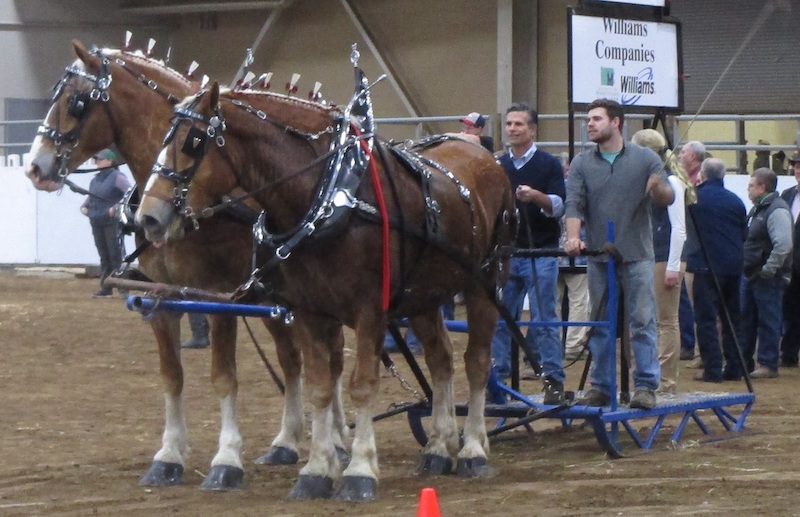 Congressman Meuser gets some final words of encouragement from an experienced handler before embarking on the obstacle course. Photo by Rick Hiduk.

“Williams sponsors the Draft Horse Hitch and Drive as a way to support the Friends of the Farm Show Foundation, which supports important educational programs during the annual Pennsylvania Farm Show,” Atchie related. This is the fourth year that Williams has financially supported the event.

Competitors, many of whom have never previously driven horses are teamed up with an experienced handler and a young adult who loads and unloads their scurry of large hay bails as they drive through an obstacle course with several “feed stations.” Perched on a sled behind a pair of large draft horses, contestants take the reins and some quick directions, and they are off.

In addition to the event itself, Williams sponsored drivers in five of the 14 heats. When all was said and done, Williams scored a solid win with U.S. Rep. Dan Meuser of Pennsylvania’s 9th District completing the course in one minute, 10 seconds and taking the blue ribbon.

According to Meuser’s office staff, this was the first time that the congressman had competed in the event, and he has no direct farm experience. That didn’t prevent him from taking the reins with a smile and pulling across the finish line at breakneck speed, relying on his co-pilot to bring the horses to a stop.

“I enjoyed the fun, friendly competition and how the participants really work to win the blue ribbon and, of course, the bragging rights,” said Atchie.

The mission of Friends of the Pennsylvania Farm Show Foundation is to “stimulate, facilitate, and support educational programs, events and incentives related to the Farm Show.”