Braskem Cracker Site for Sale. I have been reporting that LyondellBasell was interested in purchasing the Braskem cracker site in Parkersburg, West Virginia. The company has lost interest.

While LyondellBasell is not interested, other petrochemical companies are. Braskem is getting a number of inquiries about the site and decided to list with commercial broker.

“Wall of Cuomo” Can’t Keep Companies from Leaving. BTU Analytics did a great job creating the visual, “Wall of Cuomo” which is below. This wall is the opposite of the Iron Curtain walls which we designed to keep people in.

Cuomo’s wall keeps E&P Companies and NatGas pipelines out of the New York State, but it doesn’t keep companies in NY State. NatGas companies in Northern PA are being contacted by NY companies that are looking to move out of NY into PA. (RUMOR) 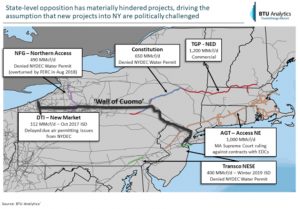 ETP Is Considering Selling Its 33% Stake in the Rover Pipeline. Energy Transfer LP, the U.S. pipeline giant controlled by billionaire Kelcy Warren, is weighing the sale of its 33% stake in a conduit that carries Appalachian natural gas to customers across the Midwest, according to people familiar with the matter. The Dallas-based pipeline operator has hired an adviser to pursue a potential sale of its operated interest in the Rover pipeline, said the people, who asked not to be named because the information isn’t public. The stake could fetch as much as $2.5 billion, one of the people said.

Range Resources sells $634M in Appalachia assets to cut debt Range Resources agrees to sell a 2% proportionately reduced overriding royalty interest in 350K net surface acres in southwest Appalachia for $600M; the properties produced 1.9B net cfe/day in Q1. RRC also completes the sale of certain non-producing acreage in Pennsylvania for $34M. The company says the combined $634M in gross proceeds from the deal will reduce total debt by 17%, and it will have cut debt by $1B over the past 12 months. RRC does not identify the buyers, but Franco-Nevada  says it bought royalty interest on Marcellus Shale acreage from RRC for $300M.

They have also asked the federal agency to suspend the project’s certificate of need and convenience and urged Ferc to reassess the need for the $7.8 billion pipeline.

The three-page letter was signed by four state senators and 14 state delegates. The state has 140 legislators.

They cited the increasing project price tag and said the companies behind the project “have never demonstrated public need“ for the pipeline. They added there is “growing evidence that the developers have overstated the demand for gas.”

A similar letter signed by 22 North Carolina legislators was sent to Ferc in May with similar requests.

Dominion Energy has asked the U.S. Supreme Court to overturn a federal appeals court decision blocking the company from building the pipeline across the Appalachian Trail in Virginia.

Last December, the Fourth U.S. Circuit Court of Appeals vacated a permit that had allowed the pipeline to cross the Appalachian Trail on national forest lands. The court ruled the U.S. Forest Service lacks the authority to approve a pipeline right-of-way across the trail.

Dominion Energy argues 56 other pipelines have crossed the trail that stretches from Georgia to Maine.

Hopes to resume construction by Oct. 1

The company has said it hopes to be able to resume construction of the pipeline by Oct. 1, and to complete it by early 2021.

Reuters reported some analysts think Dominion could cancel the pipeline if the Supreme Court does not hear the case because of increasing costs due to legal and regulatory delays.

It’s expected to be the fourth quarter of 2019 before it’s known if the Supreme Court will hear the appeal.

The 605-mile pipeline would move Utica and Marcellus Shale natural gas from West Virginia into Virginia and North Carolina.

The pipeline had originally been slated to begin service in late 2019. Construction started in the spring of 2018.

The pipeline would move 1.5 billion cubic feet per day, enough to heat about 7.5 million homes.

Texas Showdown Flares Up Over Natural-Gas Waste. A pipeline company is challenging Texas’ practice of allowing drillers to set unwanted natural gas on fire, in a case that could test state limits for how much of the fuel can legally go to waste. As shale companies turned America into the world’s top oil producer, they unlocked massive quantities of natural gas as a byproduct and Texas has allowed them to freely burn off vast volumes as area pipelines fill up. The process is known as flaring. Now, shale producer Exco Resources Inc. is seeking to flare nearly all of the gas produced by a group of South Texas wells, even though its operations are already connected to a network of pipelines. Williams Cos., the operator of the pipelines, is challenging the request, in what is believed to be the first such dispute on record.

That would be nearly enough to handle all the crude oil produced within North Dakota. It produces roughly 1.4 Mmbpd in recent months.

The companies said they anticipate incremental capacity on the Bakken Pipeline System will be determined based on committed subscriptions made by shippers made during the open season, in addition to commitments made during a prior open season that concluded in December 2018.

The pipeline runs from the Bakken/Three Forks play in North Dakota to storage terminals in Patoka, Illinois, and Nederland, Texas.

The Bakken Pipeline system went into service on June 1, 2017. It is a 1,915-mile, primarily 30-inch pipe. It includes the Dakota Access Pipeline that was the subject of numerous activist protests in North Dakota in 2016 and 2017.

The pipeline system is owned by multiple parties and is operated by a subsidiary of Energy Transfer Operating LP.

DUC’s Down in June. The number of drilled, but uncompleted wells (aka, Ducs) in the Lower 48 States’ seven most productive unconventional basins/plays slipped 0.5% from May to June, the Energy Information Administration reports in its just-released Drilling Productivity Report (Dpr).

The July Dpr shows the total number of Ducs fell by 41 units, to 8,248 in June, from 8,289 in May, Kallanish Energy reports. The seven basins/plays include the Anadarko, Appalachia, Bakken, Eagle Ford, Haynesville, Niobrara and Permian Basin.

Both Appalachia (the Marcellus and Utica Shale plays combined) and the Bakken each recorded a 15-Duc drop from May to June, to 432 and 694, respectively.

The Haynesville Shale reported its Duc total fell by three, to 189 in June, from 192 in May.

Carrizo exit shows need for consolidation in E&P sector. A big deal in the Permian basin should be cause for fanfare in oil and gas circles. And yet, a distinct sad-trombone note sounds as Carrizo Oil & Gas Inc. falls into the arms of Callon Petroleum Co. Callon is offering a 25% premium in an all-stock acquisition, based on Friday’s closing prices. But it’s the absolute price that tells the real story. Carrizo is selling out for $13.12 a share, getting it back to where it traded just less than three months ago – and way below the $23 level where it sold a slug of new shares last August. If Callon is engaging in some bottom-fishing, Carrizo is nonetheless grabbing eagerly at hook, line and sinker.

NatGas Leads Clean Electricity. Natural gas leads clean electricity production. There is a clear message in the ascendance of natural gas. Electric utilities note that power generated from natural gas is inexpensive, reliable and clean. By the way, natural gas supplies are almost unlimited. And there is an added dividend: Due to the shift largely from coal to natural gas, carbon emissions from electricity production in the United States have dropped dramatically and are now at mid-1980’s levels. Consider that over the past 10 years, natural gas has emerged as a pillar of U.S. economic strength. Jobs are being created and manufacturing is flourishing, thanks in large part to lower energy costs. The shale gas revolution has made natural gas so cheap that it is displacing coal as a fuel for generating electricity.

More Kinder News. Kinder Morgan moves ahead with pipeline connection to Kinder Morgan Inc will go ahead with a South Texas pipeline connection that would transport crude from Phillips 66’s 900,000 barrel-per-day (bpd) Gray Oak pipeline in the Permian Basin to delivery points at the Houston Ship Channel, the company said on Wednesday. The pipeline operator expects the connection will begin service by the end of 2019 carrying 100,000 bpd. Kinder and Phillips began soliciting shipper commitments for the connection in February. The company plans to spend $10 million on the project this year, and has contracts to start transporting 75,000 bpd for up to three years, Chief Executive Officer Steven Kean told investors.

Texas Proposes Rules for Unregulated Pipelines. Texas oil and gas officials have proposed sweeping new rules for rural gathering lines, which are currently unregulated. Draft regulations posted this month would impose more requirements and apply to more lines than a proposal endorsed by a federal advisory panel in June. The federal rules, if implemented, would cover the whole country. But Texas accounts for a huge share of the country’s gathering lines, which are generally small pipelines that carry oil and gas from wellheads to processing sites. All gathering lines up to about 12 inches would have to be marked and surveyed for leaks under the proposal from the Texas Railroad Commission, which regulates oil and gas, not trains. The companies that own them would be required to maintain corrosion control, set maximum pressure limits and alert people living nearby.

OOGA President Steve Downey on Ohio’s Oil and Gas Industry. The Ohio Oil & Gas Association held its annual summer meeting at Glenmoor Country Club earlier this week, and The Canton Repository caught up with OOGA President Steve Downey. Downey, EnerVest Operating’s vice president of business development, is a 32-year veteran of the industry. He is in the first of two years as OOGA president. Between golf sessions Tuesday, he kept an eye on the upcoming vote on the state budget bill that included OOGA supported provisions concerning drilling units and eliminating the $60 minimum severance tax and the $100 per well transfer fee. He also shared his thoughts on the following topics…