NESE Pipeline Decision Pushed Back One Month. NJ’s decision deadline on gas pipeline pushed back a month. Jersey environmental regulators will have another month to decide whether to grant key permits to a company seeking to build a natural gas pipeline through New Jersey and New York. The state Department of Environmental Protection says Oklahoma-based Williams Companies asked for a month-long extension in considering their applications for waterfront development and coastal land use permits. The deadline had been Wednesday. The new deadline for those two permit decisions is October 25. The DEP says a third permit, involving flood hazards, is due Oct. 29. One for freshwater wetlands work has no statutory deadline. Williams says the pipeline is needed to ensure adequate heating and energy supplies to New York and Long Island, and that it can be built safely with minimal environmental disruption, which environmentalists dispute.

The new 28,000-square-foot facility features a five-bay terminal that can accommodate simultaneous maintenance on their truck fleet. At peak capacity, the facility will employ 100 people, including drivers, dispatch employees and mechanics.

“Since its inception over 10 year ago, GDS has grown exponentially, supplying job opportunities to hundreds of local people,” Phil Stalnaker, Cabot Oil & Gas Corporation’s North Region vice president, said. “The company continues to invest in the community by expanding its facilities and increasing its fleet size. Cabot is proud to support GDS and its growth in Susquehanna County,” Stalnaker added.

GDS now has four facilities in operation, the new maintenance facility, located at 4081 SR 92 Kingsley, Pa., 18826, along with the updated Montrose dispatch and Montrose maintenance facility and its Dimock-based headquarters. Ongoing growth in the industry over the past several years has allowed for substantial GDS facility upgrades, including a newly renovated dispatch facility.

Permian Pipelines Creating NatGas Oversupply. New Permian pipelines will add to oversupplied gas market. U.S. natural gas supply is outstripping demand, holding down prices and prompting speculation over just how low and how long the slide will continue; one research firm predicts prices next year will be the lowest in 22 years. “It is simply too much too fast,” said Sam Andrus, IHS Markit executive director, who covers North American gas markets for the global energy analytics and research company. “Drillers are now able to increase supply faster than domestic or global markets can consume it.” Taken by itself, the U.S. production gain the past two years alone would equal the fourth-largest gas producer in the world. Though U.S. liquefied natural gas and pipeline gas exports have climbed to record highs and power plants nationwide are burning more of the fuel than ever before, even that strong growth in domestic and international demand cannot keep pace with record U.S. gas production.

PA E&P Companies Driving down Methane Emissions. Oil and gas industry working to reduce emissions. Pennsylvania’s natural gas producers agree that reducing methane emissions is a very high priority, and the facts about controlling them show the progress made to do so. The production of oil and gas in the Appalachian Basin states has skyrocketed, surging 379% in the seven years between 2011-2017. Even with this growth, methane emissions have ticked down from 5.3 to 4.7 million metric tons during that period. Measured as “emissions intensity,” or emissions generated per unit of energy produced, those levels are down 82%. This is being achieved by technological innovations and increased efforts to improve sustainability and efficiency by both producers and midstream companies.

PTTGC Reaches Agreement on Air Quality Protections. A petrochemical company and three environmental groups have reached an agreement to increase air quality protections at a proposed ethane cracker plant in Belmont County, along the Ohio River. The Ohio Environmental Protection Agency approved an air permit, called a “permit to install” for PTTGCA, based in Thailand, in December of last year. The Sierra Club, Earthworks and FreshWater Accountability Project argued that the Ohio EPA had underestimated the amount of pollution that would come from the plant, and the health problems that it could cause for nearby residents. So, the three nonprofits appealed the permit to the Ohio Environmental Review Appeals Commission.

PennEast Pipeline’s Challenges. PennEast eminent domain loss could stymie D.C. Circuit case. Judges for the U.S. Court of Appeals for the District of Columbia Circuit have asked whether they should delay their examination of a federal authorization for the PennEast natural gas pipeline. The court’s request for more information follows a 3rd U.S. Circuit Court of Appeals ruling blocking project developers from using eminent domain to seize state-owned lands in New Jersey along the route (Energywire, Sept. 12). Garden State regulators asked the D.C. Circuit to hold the case until next steps from the 3rd Circuit ruling are clear.

Permian Production Decline. Who Is to Blame for The Decline in Permian Production? West Texas’ Permian Basin has had a rough year. Investors have been pulling away from the once-gushing Permian Basin after a year of diminishing returns and performing under expectations. Last month, when crude oil was down a whopping 22 percent on the year, there were damning headlines such as “The Permian Basin Is Getting More Toxic to Investors” headlining Yahoo! Finance and other outfits quick to condemn the faltering oilfield.

Permian Jobs. Permian Oil and Gas to Support 93,000 Jobs in 2020. The Permian Basin oil and gas industry will support 93,201 jobs in 2020, according to the latest forecast from the Texas Independent Producers & Royalty Owners Association (TIPRO). This is 5,578 more jobs than the sector supported in the first half of 2019 and 12,209 more jobs than the sector supported last year, TIPRO revealed. 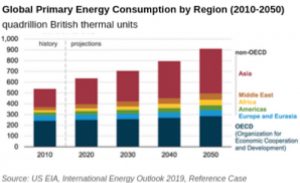 Huntley & Huntley Changes Its Name. A natural gas production firm that is gaining momentum in the region has adopted a new name.

Huntley & Huntley Energy Exploration, a privately held independent company based at Southpointe, announced Wednesday morning that it is now Olympus Energy LLC. The company has acquired 100,000 acres in the Marcellus and Utica shale plays.

Huntley & Huntley was formed in 2012. Blackstone, a private equity firm, is the majority owner.

The name change, according to a news release from Olympus, “signals the beginning of a new chapter for the company, focusing on the development of its assets and better reflects its vision for the future.”

Eagle Ford Hanging in There. Oil producers, experts say Eagle Ford is weathering volatility better than most oil fields. San Antonio Express-News. The Eagle Ford Shale has lost a few drilling rigs since a 22 percent plunge in oil prices in November, but the South Texas field is weathering the volatility better than other oil-producing regions in the U.S., according to a leading energy consulting firm. The squeeze on oil producers’ profitability resulted in the number of U.S. rigs dropping to about 900 from 1,200 in November, Bernadette Johnson, vice president of markets at Enverus, said during a panel Tuesday at the DUG Eagle Ford energy conference in San Antonio. But she said the situation was much brighter in the Eagle Ford. In the multi-county shale region, the number of rigs is now 76 from a little more than 80 in November, she said. 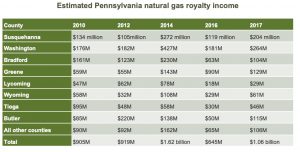 OH Emissions Down. (Thanks, CEA) Consumer Energy Alliance (CEA) today released an Ohio emissions brief that looks at key pollutants and the overall environmental improvements seen across the state. The brief offers further support for one of the great untold stories in Ohio and across the country, the United States is leading the world in environmental stewardship and emission reduction.

The brief comes as youth across the country marched in support of a healthier environment, and to seek answers from community leaders, policymakers and adults about what is being done to improve our environment while also meeting today’s growing demand for energy. This brief shows everyone that many of their questions have already been answered by ongoing innovation and technology in the U.S.

CEA’s brief found that even as Ohio increases its energy production and remains one of the nation’s largest energy consumers, emissions of key air pollutants and greenhouse gases have declined significantly across the state.

From 1990 to 2017, Ohio’s emissions of key pollutants have decreased across the board, with a:

Moreover, while Ohio’s emissions of key pollutants and carbon dioxide were decreasing, the state saw a marked increase in energy production, boosting job creation and economic growth. Ohio production of natural gas increased more than 1,900 percent over the past decade.

“As Ohioans continue to voice their support for creating a healthier environment, and ensuring access to affordable and reliable energy, we are happy that data from the EPA and the WHO demonstrates that Ohioans can simultaneously have a cleaner environment and energy production,” said Chris Ventura, CEA’s Executive Director in Ohio. “This is due in part to the commonsense regulatory policies enacted by our elected officials and the voluntary actions that have been taken by companies across Ohio to the benefit of our communities. We should all be proud that Ohio is one of the leading states in the nation in realizing greater emissions reductions. Now, let’s keep this amazing progress going!”

This brief follows CEA’s Energy Savings Report for Ohio consumers, which found that families, small business and manufacturers across the state saved over $40 billion on their natural gas utility bills over the past decade. This is due to the prolific American Energy Revolution occurring in Southeast Ohio, and similar states across the country.