Latest facts and rumors from the Marcellus, Utica, and Permian, Eagle Ford Plays

MVP Deadline Extension.  Can Manchin Make This Happen? Regulators extend deadline for Mountain Valley Pipeline. Daily Press. Federal regulators have given the developers of the Mountain Valley Pipeline another four years to complete the long-delayed natural gas project. The Federal Energy Regulatory Commission made the unanimous decision late Tuesday, the Roanoke Times reported. The new deadline for completion of the 303-mile pipeline spanning portions of West Virginia and Virginia is Oct. 13, 2026. Mountain Valley, which asked for the extension in June, praised FERC’s decision and said it hopes to have the pipeline finished by late 2023. The project still needs to regain three sets of federal permits that were previously struck down in the courts. “As outlined in the order … FERC commissioners agreed that a four-year extension is reasonable given judicial review of new permits and that Mountain Valley has continued to actively pursue project construction,” spokeswoman Natalie Cox wrote in an email to the newspaper.

TX Bans 10 Banks and More.  Texas bans 10 banks, 348 investment funds over fossil fuel policies. S&P Global. Texas is banning 10 large banks and 348 investment funds for allegedly boycotting fossil fuel-based energy companies critical to the state’s economy, a move critics said could cost taxpayers in the Lone Star State hundreds of millions annually in higher interest costs. The state’s blacklist released Aug. 24 follows West Virginia’s decision in July to ban five banks for the same reason. Such actions come as some Republican-led states are cracking down on corporate social and environmental policies the states perceive to be politically driven. Banks that Texas put on notice earlier this year went to great lengths to show that they are, in fact, investing tens of millions in the fossil fuel industry, but some failed to convince the state. Texas and West Virginia have now banned BlackRock Inc., the world’s largest asset manager, from doing business with the state. Large pension funds such as the Teacher Retirement System of Texas will now be required to divest from companies and funds on the list, as will a multibillion-dollar public school fund. Note: Bloomberg also reports.

1,100 Scientists and Policy Say “There’s No Climate Emergency” Thanks, MDN.  Here’s something you won’t hear about or read in the Big Legacy Media…A group of 1,100 scientists and policy experts from around the world has joined together to establish a new group called Climate Intelligence (Clintel for short). The new group operates from the Netherlands. The tagline and mission of the group is this: “There is No Climate Emergency.” The group says climate science should be less political, and climate policies should be more scientific. Amen!

Cool, Wet Fall.  The Farmers’ Almanac Says It All 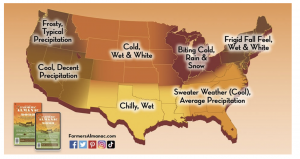 Uncle Joe Says, “Tough luck,” to Europeans.  Granholm to Europe: Tough luck. Wall Street Journal. Opinion. America’s allies in Europe are desperate for alternative supplies of fuel amid the Ukraine war, and U.S. producers are happy to provide what they can. So wouldn’t you know the Biden Administration now wants to limit fuel exports. That’s the message Energy Secretary Jennifer Granholm sent last week in a letter imploring seven major refiners to limit fuel exports. We obtained a copy of the letter, which the Administration didn’t release publicly. Ms. Granholm warns that gasoline inventories on the East Coast are at a near-decade low, and diesel stocks are nearly 50% below the five-year average across the region. But the problem isn’t U.S. exports. It’s the political and regulatory assault on U.S. production and refining. One culprit is the 2019 closure of the Philadelphia Energy Solutions refinery, which removed about 335,000 barrels a day of refining capacity from the Northeast. This made the region more dependent on Gulf Coast and overseas refineries.

Uncle Joe’s Coming Energy Crisis.  Next up: Biden’s energy crisis. The Hill. Opinion. We’ve had Biden’s inflation and Biden’s recession; now we face Biden’s energy crisis. It didn’t have to be this way. Twenty million Americans are behind on their utility bills, according to the National Energy Assistance Directors Association. Who is surprised? Even as real wages tumbled 3.6 percent over the past year, electricity prices increased 16 percent, squeezing consumers. Unhappily, things are about to get worse. Natural gas, used to create power and to heat almost half of America’s homes, is trading at prices nearly double those of last year, and the winter heating season promises to bring even higher prices. The White House has slow-walked oil and gas leasing and the approval of drilling permits. In addition, it is leaning on banks, pressuring them not to lend to fossil fuel suppliers and pressuring investment firms not to buy their stocks.

Shale Producers Debt Free.  US shale could erase debt by 2024, freeing up cash for gas pivot. Bloomberg. US shale producers are on course to make nearly $200 billion this year, enough to make the industry debt-free by 2024 and potentially fund a pivot toward more natural gas production, according to Deloitte LLP. High oil prices and disciplined capital spending mean American frackers are on course for their most profitable year on record, part of a global trend that will see the oil and gas industry generate a record $1.4 trillion of free cash flow, Deloitte said in a report. After paying down debt and rewarding shareholders, US producers will likely focus more on natural gas production due to high demand and prices around the world. “We see a shift in upstream activity toward natural gas,” Amy Chronis, Deloitte’s US oil, gas and chemicals leader, said in an interview. Shale operators “will double down on US natural gas basins” and may have enough money left over to increase investments in low-carbon fuels.

Delay in Freeport LNG Development Hurting NatGas Prices.  Natural gas slides in US as blast-hit export terminal delays restart. Bloomberg. US natural gas prices tumbled after the operators of a key export terminal damaged in an explosion earlier this year announced a delay to the timeline for restart. The Freeport liquefied natural gas terminal in Texas will begin initial production in early to mid-November, according to a statement Tuesday. Freeport LNG Development LP had previously said it was targeting a restart in October. The announcement means more gas will be available for domestic use to add to storage ahead of the winter, weighing on prices. The gas market has been highly sensitive to any news of the restart timeline for Freeport, which accounted for almost a fifth of all overseas shipments of gas from the US before a blast in June knocked the terminal offline.

Occidental Constructing Carbon Capture Facility in West TX.  Occidental to break ground on Texas direct air capture project. Reuters. U.S. oil producer Occidental Petroleum Corp will begin construction on its first carbon capture project this fall, an official told an industry group on Tuesday, a key part of its effort to build a business from greenhouse gas reduction. Tom Janiszewski, vice president of regulatory and land for Occidental, told the Colorado Oil and Gas Association’s annual summit that the West Texas facility would begin operations by 2024. Occidental’s Low Carbon Ventures LLC arm formed 1PointFive with venture capital firm Rusheen Capital Management to license, finance and deploy direct air capture (DAC) technology, a method of extracting carbon dioxide from the atmosphere. The precise location for the West Texas facility has not been identified, but Occidental has applied for tax credits for a project in Ector County. The business also is evaluating a site in Livingston Parish, Louisiana, for a separate DAC operation.

LNG Exporter Has a Problem.  The world’s biggest LNG exporter has a pipeline problem. Oil Price. Recently, LNG giant Cheniere Energy Inc. revealed that it’s had the most active year for contracting since 2011. Unfortunately, whereas the United States has the world’s largest backlog of near-shovel-ready liquefied natural gas projects, takeaway constraints including limited pipeline capacity remain the biggest hurdle to expanding the sector. In the Appalachian Basin, the country’s largest gas-producing region churning out more than 35 Bcf/d, environmental groups have repeatedly stopped or slowed down pipeline projects and limited further growth in the Northeast. This leaves the Permian Basin and Haynesville Shale to shoulder much of the growth forecast for LNG exports. Indeed, EQT Corp. CEO Toby Rice recently acknowledged that Appalachian pipeline capacity has “hit a wall.”

NatGas to Mexico Growing.  West Texas natural gas exports to Mexico growing steadily. NGI. U.S. natural gas exports to Mexico via West Texas are once again heading upward this year, according to analysis by the U.S. Energy Information Administration (EIA). Exports from West Texas “have grown steadily in recent years, doubling from 0.6 Bcf/d in 2019 to 1.2 Bcf/d in 2021 as more connecting pipelines in Central and Southwest Mexico have been placed in service in the past three years,” said EIA analysts led by James Easton and Victoria Zaretskaya. In May, West Texas exports into Mexico averaged a record high of 1.6 Bcf/d, researchers said. The downstream pipelines include Grup Carso’s 472 MMcf/d Samalayuca-Sásabe pipeline and Fermaca’s Waha-to-Guadalajara, aka Wahalajara, system.

Finally, a Place for NatGas in Zero-Carbon Grid.  There is a place for natural gas on a zero-carbon grid: EPRI. Utility Dive. The North American Electric Reliability Corp. has warned that gas generation will be necessary to balance the transition to more variable renewables and storage. EPRI’s new research concludes there is a role for natural gas capacity and generation “during the transition to zero [emissions] and at the destination.” “Utilities are pledging net-zero targets that can include plans to build gas-fired capacity, which raises questions about levels of natural gas that are consistent with electric sector decarbonization goals,” the paper states. Researchers modeled scenarios where wind and solar generation shares ranged from 52% to 66% in most regions, compared with 0% to 19% gas generation. Nuclear, batteries and other resources were also included in the analysis. Natural gas capacity “can be compatible with net-zero emissions goals if a net-zero policy framing allows units with CO2 removal offset,” EPRI researchers concluded in the paper.